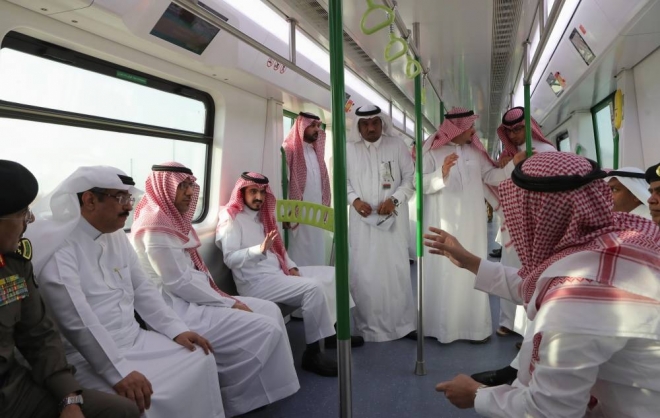 MAKKAH — Deputy Emir of Makkah Prince Badr Bin Sultan on Tuesday made an inspection tour of the holy sites to ascertain their readiness for the services of the pilgrims.

He started his tour by a visit to the operation, maintenance and control center for the Mashaer train, which has about 1,500 surveillance cameras and is fully manned by the Saudi cadres.

He took the train on a trip to make sure that all preparations are in place to transport about 350,000 pilgrims via 2,000 trips during the Haj.

The train will start operations during the period from Dhul Hijjah 8 to 13 (Aug. 9-14). He also checked samples of the tickets for boarding the train, which will shuttle from Makkah to Mina, Arafat, Muzdalifah and back.

The prince made an inspection tour of the Jamarat area and listened to a briefing about the shading of the slopes of the Jamarat to protect the pilgrims against the scorching sun.

During his tour, Prince Badr also visited the Kingdom's Sacrificial Meat Project in Muaissim, which is being supervised by the Islamic Development Bank and in which more than 40,000 people will be working to slaughter more than a million animals.


⇐ Previous:
Streets in Makkah to have special tracks for the blind
Next: ⇒
Iranian pilgrims start arriving in Madinah