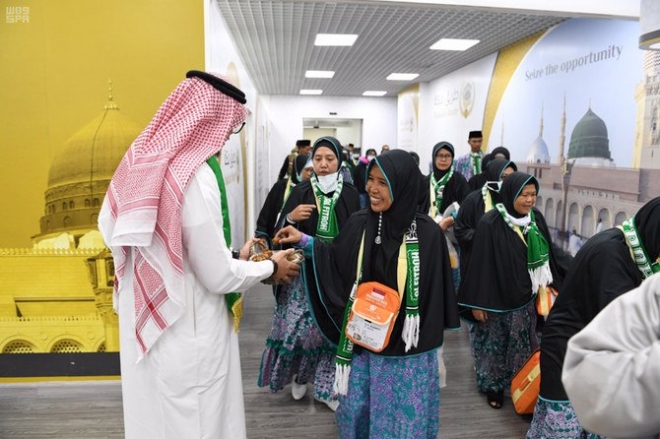 MADINAH/ALGIERS: The plane carrying the second group of Indonesian pilgrims as part of the “Makkah Route” initiative arrived at Prince Mohammed bin Abdul Aziz International Airport in Madinah with 393 pilgrims on board.

The pilgrims will perform Hajj this year and visit the Prophet’s Mosque.

In statements to SPA, the pilgrims thanked Saudi Arabia for its hospitality and for the initiative that helped to facilitate their travel and entry into the Kingdom.

Meanwhile, up to 36,800 Algerians have registered their names, intending to perform the coming Hajj, Saudi Ambassador to Algeria Abdul Aziz bin Ibrahim Al-Omairini said, adding that the Kingdom was sparing no effort to best serve pilgrims.

At a press conference in Algiers, the ambassador said that the embassy had already issued 2,885 entry visas for various purposes, with 7,000 e-visas earmarked for Hajj.

He said that Hajj-related flights from Algiers to the holy sites are set to start on July 15 and continue until Aug. 6.