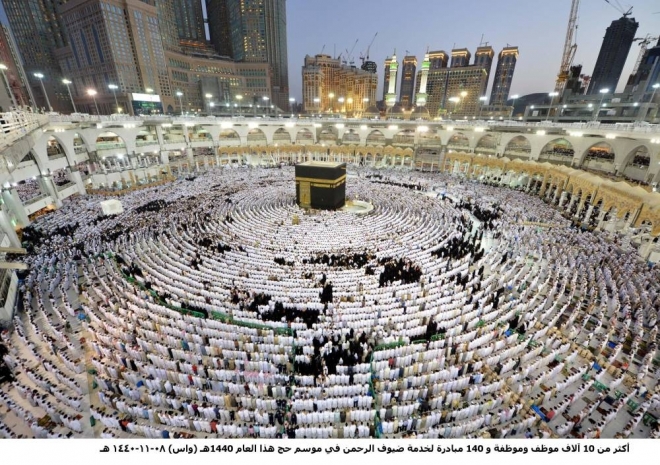 MAKKAH — The Presidency for the Affairs of the Two Holy Mosques has mobilized more than 10,000 men and women staff to implement its operation plans for the upcoming Haj.

He said that there is a comprehensive guidance program to make the pilgrims aware of various aspects of their rituals and enable them to perform them in the best possible manner. Several eminent scholars will lead religious classes in addition to distribution of religious and guidance books and leaflets in a number of languages.

The presidency has made available instant translation of Friday sermons at the Grand Mosque in Makkah and the Prophet’s Mosque in Madinah in at least 10 languages in addition to the sign language.

Sudais said a total of 107,000 pilgrims could perform tawaf in an hour with the completion of the expansion of the mataf (circumambulation area around the Holy Kaaba). All the courtyards of the Grand Mosque have readied with full capacity for the benefit of the pilgrims.

There are 8,441 toilet units and over 6,000 facilities for taking ablution in the courtyards of the Two Holy Mosques. He said that the campaign titled “Serving pilgrims and visitors is a medal of honor for us” is being carried out successfully in its sixth year during the current Haj season.

On Thursday, Sudais received Brig. Gen. Yahya Al-Oqail, commander of the Grand Mosque Security Forces, at his office in Makkah.

Meanwhile, the Ministry of Health has stepped up its preparations for dealing with heat stress and other heat-related diseases that are expected to occur this year as the Haj season coincides with high temperatures.

The General Authority of Meteorology and Environmental Protection said in its report on Thursday that the weather during Haj in August could be very hot in daytime and moderate in night.

The health facilities in Makkah, Madinah and the holy sites are equipped to deal with heat stress and sunstroke. A large number of water spraying fans have been set up.

Field training courses have also been carried out for the health staff to deal with sunstroke cases, their treatment mechanism and transportation of the affected pilgrims.

The ministry said that there has been meticulous coordination among the relevant authorities to carry out awareness and educational programs for all pilgrims on the best ways to avoid sunstroke and heat exhaustion in different languages.

An awareness program aimed at avoiding exposure to sun and extreme temperatures was also put in place for both domestic and foreign pilgrims. The ministry has readied 80 well-equipped heavy ambulances and 100 mini ambulances at the holy cities and the holy sites.

In a related development, the Tawafa Organization for South Asian Pilgrims organized on Thursday a lecture on “Safety of the pilgrims’ accommodation in Makkah.”

Abdullah Al-Maadi, chairman of the committee for security and safety and grouping of pilgrims at Mashair Train, and Suhail Banjar, deputy executive director for emergency and safety, delivered the classes for the staff members of 140 maktabs under the organization.