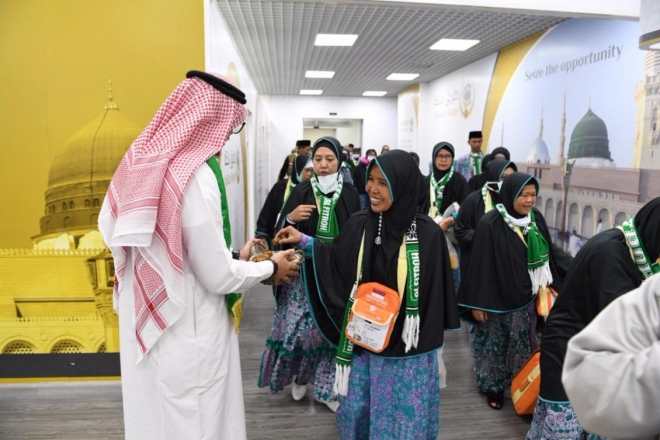 RIYADH: Nearly 37,000 Hajj pilgrims from Pakistan, Bangladesh, Indonesia and Malaysia arrived in Saudi Arabia aboard 90 flights between July 4 and July 11 as part of the Makkah Route initiative, Saudi Arabia’s General Directorate of Passports announced this week.

Pilgrims received a warm welcome from all bodies taking part in the initiative from the moment they left their countries to the moment they arrived at their residences in either Makkah or Madinah, Saudi Press Agency reported.

The Makkah Route initiative is expected to serve more than 225,000 pilgrims coming from airports in Malaysia, Indonesia, Pakistan, Bangladesh and Tunisia.

The service includes issuing visas, ensuring compliance with health requirements and codifying and sorting luggage at airports in the pilgrims’ own countries.

This enables them to bypass procedures on arrival in the Kingdom and to head directly to buses waiting to transport them to their accommodation in Makkah and Madinah.

Service authorities deliver pilgrims’ luggage to their accommodation in the holy cities.

The initiative aims to provide the best service possible for pilgrims by completing their entry into the Kingdom from airports in their countries.

The Ministry of Foreign Affairs grants beneficiaries of the initiative e-Hajj visas after inserting pilgrims’ data in the electronic tracking of Hajj visas.