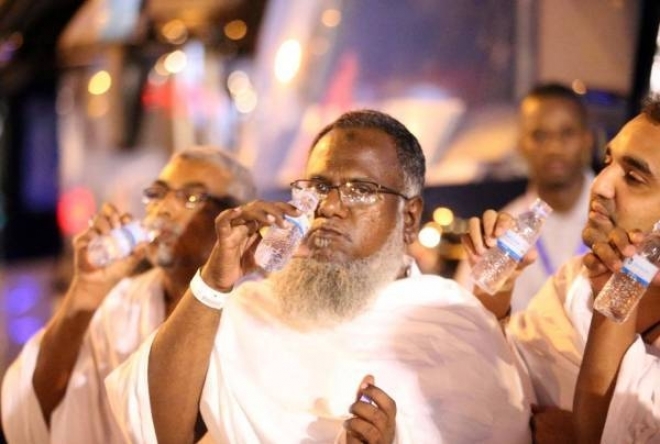 JEDDAH — The pilgrims are welcomed into the Kingdom and seen off by providing them with the blessed Zamzam water. The blessed water cans will also be distributed among them at the places of their accommodation in Makkah.

The pilgrims will be supplied with Zamzam water on arrival at King Abdulaziz International Airport in Jeddah and at the entrance to Makkah.

Amir Obaid, deputy chairman of the Unified Zamazmah Office, said the office will this year implement three working programs to provide the Guests of Allah with the blessed water.

He said the first program will start at the two guidance centers on the Makkah-Jeddah and the Makkah-Madinah Expressways.

Obaid said about 134 field workers were recruited to distribute Zamzam water among the pilgrims at these two centers and that four cooling rooms have been set up to keep the water cool.

He said shades have been established to protect water cartons against the heat and added that two forklifts will be used to upload as many as 3.3 million containers of water with the capacity of 200 milligrams.

He said under the second program, the 20-mg containers of Zamzam water will be distributed among the pilgrims at their accommodation places in Makkah by about 770 field workers.

He said there will be 99 trucks to distribute as many as 1.6 million containers of Zamzam water among the pilgrims during the entire Haj season.

Obaid said the the third program will begin at the end of the pilgrimage where more than 2.4 million containers of the capacity of 200 mg will be given to the pilgrims before they depart for their respective countries.