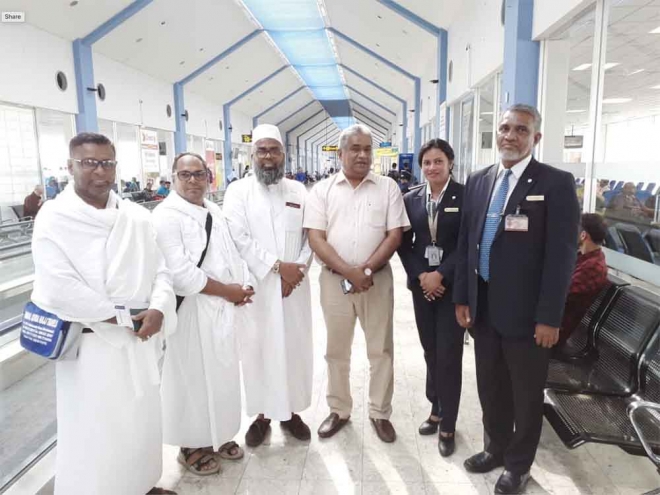 COLOMBO: Nearly 180 Sri Lankan Hajj pilgrims left for Saudi Arabia on Monday night, but not before thanking the Kingdom for the comprehensive facilities offered to them.

Mohamed Hashim Mohamed Haleem, Sri Lanka’s minister of postal services and Muslim religious affairs, said that this year’s issuing of Hajj visas was smooth due to the new e-Hajj services introduced by the Saudi government.

“We were able to process all 4,000 Hajj visas efficiently. All of them were issued well in time,” Haleem said.

He added that officials from his ministry will be available at the airport to assist the pilgrims with their departures.

The minister said the flights of pilgrims this year will be ferried by both Saudi Arabian Airlines and Sri Lankan Airlines. Haleem, who intends to participate in this year’s Hajj, said that the last flight of Sri Lankan pilgrims will leave Colombo on Aug. 7.

Sajjath Mohammed, a journalist from Madawala News, praised the e-Hajj service, saying: “The biometric services for the visas were available to pilgrims in Kandy and Batticaloa in addition to Colombo, the capital of the island.”

Rizmi Reyal, president of the International Airline Ticketing Academy in Sri Lanka, said that this year the Hajj services from Colombo have been enhanced to give a better experience to the pilgrims. He thanked the Saudi government, the Muslim Religious Affairs Ministry in Colombo, the Saudi Embassy in Colombo and the Sri Lankan Embassy in Riyadh for playing their part in these improvements.

The Sri Lankan government will also send a medical team to attend to any urgent needs of the pilgrims before they are taken to the nearest medical facilities in the two holy cities.