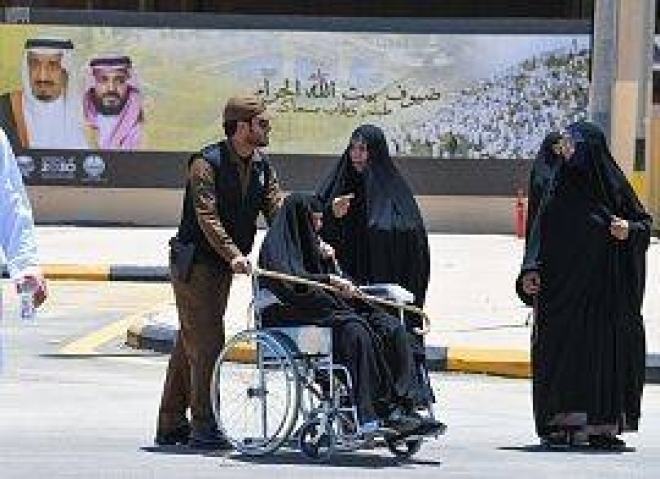 JEDDAH — In line with the directives of the Custodian of the Two Holy Mosques King Salman and Crown Prince Muhammad Bin Salman, deputy premier and minister of defense, the Ministry of Haj and Umrah has completed all the necessary arrangements for serving the Qatari brethren wishing to perform Haj this year 1440H.

In this connection, the ministry has allocated the electronic link (https://qh1440.haj.gov.sa), to enable them to register their data and select the services that suit their needs.

The ministry has reaffirmed that all the services and facilities being provided by the Kingdom to the pilgrims stem from its well-established and consolidated principles to facilitate the arrival of Muslims from all over the world to perform their Haj and Umrah rites.

This depicts the pioneering role that Allah Almighty has honored the Kingdom with in caring for the two holy mosques and serving the pilgrims, Umrah performers and visitors, irrespective of their nationalities and diverse cultures and affiliations from different parts of the world.

The measure is also meant to give the opportunity to the Qatari brethren to arrive in the holy lands to perform Haj and Umrah in an atmosphere that is replete with safety, security and peace of mind.

The Ministry of Haj and Umrah has called on the Qatari authorities not to block the electronic links the way it did in the past and cooperate in enabling the Qatari pilgrims to perform their rites with ease.

Meanwhile, the number of pilgrims coming to perform Haj from abroad, via the airports, seaports and land crossing points, have reached 388,521 since the beginning of pilgrims’ arrival until 8:00 a.m. on Wednesday, according to statistics issued by the Saudi Directorate General of Passports, Saudi Press Agency (SPA) said Wednesday.

In the breakdown of figures, the Directorate General of Passports has said that the number of pilgrims who arrived by air totaled 385,430, by sea 1,815 and by land 1,276.

In a related development, the Minister of Haj and Umrah Dr. Muhammad Saleh Bin Taher Benten has commended the call of the Kingdom to all pilgrims to dedicate their time to perform Haj rituals, be considerate to their fellow pilgrims, feel the spirituality of the places and distance themselves from all that stain the serenity and tranquility of Haj by raising sectarian or political slogans.

He reaffirmed that that the Kingdom will not tolerate such conducts that disturb Haj rituals and will take the necessary measures to prevent such acts and apply the relevant laws and regulations.

Haj is an opportunity for closer connections, cohesion and unity of Muslims. It is not a place for political or sectarian arguments nor discrimination or incitement.

He reiterated the significance of Haj, the fifth pillar of Islam, as Allah Almighty said, "Let there be no obscenity, nor wickedness, nor wrangling in the Haj," he added.

The Haj Ministry said the Makkah Route Initiative at Carthage International Airport in Tunisia is set to be launched next week to facilitate transporting Tunisian pilgrims to the Kingdom after issuing them Haj visas, taking their biometric data, verifying their fulfillment of health conditions, checking their passports, and screening and coding their luggage to facilitate their taking delivery of their luggage at their residences following arrival in the Kingdom.

The Ministry of Islamic Affairs, Call and Guidance, represented by the Department of Publications Affairs and Scholarly Research, has started its preparations for the launch of the program for distribution of publications in this year’s Haj season 1440 AH, by providing pilgrims with ritual books upon their entry into the Kingdom and distributing the gift of the Custodian of the Two Holy Mosques — a copy of the Holy Qur’an and translations of the meanings of its verses, in addition to some guidance books, on their departure.

The program aims to spread the correct awareness among pilgrims and calls for adherence to the correct method of belief, worship and behavior, in addition to guiding pilgrims to perform their rituals properly and inform them about their religion.

The Undersecretary of the Ministry for Publications and Scholarly Affairs, Sheikh Abdulaziz Bin Muhammad Al-Hamdan has pointed out that the titles of the books approved for Haj this year amounted to 52 titles in more than 30 languages, and more than 8,000,000 copies of the Holy Qur’an, translations of its meanings, ritual books and manuals will be distributed.

He noted that the Islamic electronic library distributed to all international airports of the Kingdom, exit-port centers and some mosques and important sites are an electronic platform that contains all of the Ministry's written, read and audio versions of books on Haj and Umrah, available to all via the e.site:www.islamic-ebook.com.

During the meeting, the Bruneian official thanked the government of the Custodian of the Two Holy Mosques King Salman and Crown Prince Muhammad Bin Salman for the services provided by the Kingdom to pilgrims of Brunei Darussalam.