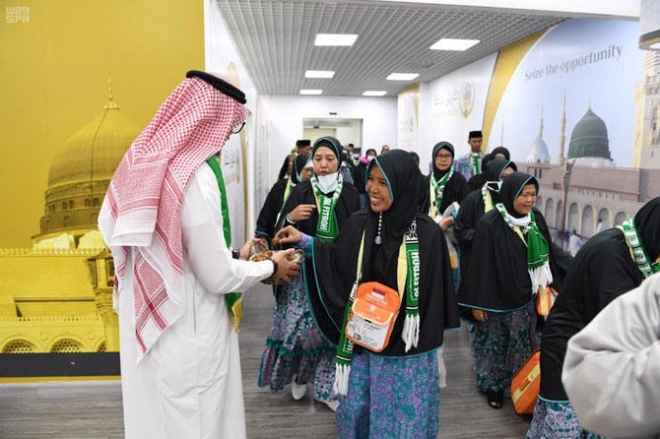 JAKARTA: Indonesia hopes fast tracking for its Hajj pilgrims, known as the “Makkah Road” initiative, will be expanded to at least two more airports in Java next year, which serve as embarkation points from the country’s most populated island and its neighbors, a government official said Thursday.

Indonesian pilgrims have benefited from the initiative since it was introduced last year in Soekarno Hatta Airport in Tangerang, Banten province, which serves pilgrims from Lampung, West Java and Banten provinces as well as Jakarta.

About 40 Saudi immigration officials have been assigned to work in the clearance process during the 30-day Hajj departure period.

“Even though it was introduced last year, the service is still only available in Soekarno Hatta Airport. To be able to provide it in other airports would depend on the availability of Saudi immigration officials and whether the other airports have the infrastructure to support it,” Ramadhan Harisman, the secretary of religious affair’s directorate general for Hajj and Umrah services, told Arab News.

He said Indonesia hoped to eventually fast-track Hajj immigration clearance services at all 13 airports that ran routes to Saudi Arabia to perform Hajj.

“Next year we hope to be able to have the fast-track clearance in Surabaya and Solo. The two airports there are also among the busiest, serving a huge number of pilgrims” Harisman said.

“The two airports are ready, we just need to finalize it with Saudi officials,” he added.

If the fast-track clearance is provided in the two airports in addition to Jakarta, the service would be able to process up to 140,000 pilgrims or more than 60 percent out of Indonesia’s pilgrims.

Indonesia is sending the largest number of Hajj pilgrims this year after it received an increase in its Hajj quota to 231,000 pilgrims.

Harisman said the number of pilgrims that have departed as per 25 July is 134,648 and the last departure is scheduled to take place on August 5. At least 17 have died during the pilgrimage, including a man from from Indramayu, West Java, who died on the plane just two hours before it arrived in King Abdul Aziz airport earlier this week.