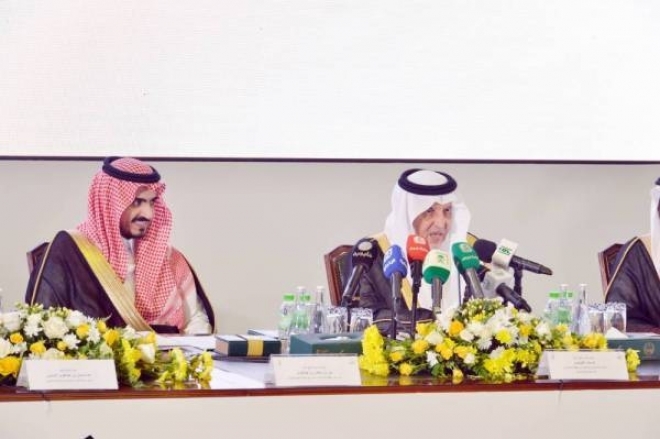 MAKKAH — The Emir of Makkah Province, adviser to Custodian of the Two Holy Mosques and Chairman of the Central Haj Committee Prince Khaled Al-Faisal announced on Tuesday the launching of the 12th edition of the awareness media campaign “Haj is worship and civilized conduct” under the motto “Haj is a message of peace”, Saudi Press Agency reported.

Simultaneously, during a press conference on Tuesday, the Emir of Makkah announced the launching of the New Media Prize under the name “Emirate of Makkah Prize for New Media” in four branches. They are short film, photography, Tweet and Snapchat. The prizes are totally worth SR500,000.

Prince Khaled expressed thanks and appreciation to Custodian of the Two Holy Mosques King Salman for according the region a lot of attention. He prayed to Allah Almighty “to enable us to fulfill the ambitions of the Monarch and the Crown Prince.”

He also expressed thanks to all the sectors responsible for serving the pilgrims, particularly the Deputy Emir of Makkah Province Prince Badr Bin Sultan and the security men for the great efforts they are exerting.

Prince Khaled added: “This year the Ministry of Haj and Umrah has come up with new systems facilitating the pilgrim’s arrival in this country without any hardships. We wish these systems success and that the pilgrims’ spiritual journey will be successful, easy and comfortable.”

He further said: “Every year, there are studies and research on the results and outcomes of the previous year’s Haj. We are keen to benefit from the previous experiences. In this connection, the Central Haj Committee studies the observations and remarks and makes sure to prevent any negative aspects while enhancing and developing the positive aspects.”

Prince Khaled called on those who have performed Haj before to give opportunity to others, who have not performed Haj at all, (meaning that the latter are yearning and longing to perform the obligatory Haj for the first time in their lives).

Among those present at the press conference were Prince Badr, deputy emir of Makkah, President for the Affairs of the Two Holy Mosques Sheikh Dr. Abdulrahman Al-Sudais and Deputy Minister of Haj and Umrah Dr. Abdulfattah Mashaat.

Meanwhile, the Undersecretary of Makkah Emirate and Chairman of the Supervisory Committee for the awareness media campaign “Haj is worship and civilized conduct” Dr. Hisham Al-Faleh said: “The campaign has achieved successes throughout the past 11 years. These tangible successes are the result of cumulative work resulting in raising the awareness level in the society on the importance of abiding by the regulations during Haj and keeping away from any violations.”

He added that the campaign has shifted its focus to the positive aspects and developing them, at a time when the violations have become rare cases. Al-Faleh also thanked the pilgrims from within the Kingdom and abroad for abiding by the regulations and keeping away from committing violations, hence resulting in improving the quality of services provided to pilgrims.

The awareness campaign, which is being launched in cooperation with the pertinent authorities aims to create awareness on the necessity to abide by the directives and not to perform Haj without a permit. It also aims to intensify the campaigns against overstayers, and monitor and follow up owners of bogus Haj establishments, which organize Haj and Umrah services without being granted a permit by the Ministry of Haj and Umrah to practice the activity.

Some 30 authorities representing the government and private sectors are continuing the current season of the “Haj is worship and civilized conduct” media campaign and implementing its plans aiming to enhance peace via Haj in four stages.

The first stage focuses on receiving pilgrims, the second stage on the message “Why obtain a Haj permit?”, the third stage tries to shed light on the negative behaviors in Haj and focuses on some of them. It is aimed at all pilgrims in general. Finally, the fourth stage bears a message of thanks to workers during the Haj season and the pilgrims, for their compliance with the directives.

Since its launch, the campaign has achieved great successes. According to statistics, the campaign has registered a drop in violations and violators in the pilgrimage during the past seasons. The same has occurred with the bogus Haj companies and camps. The number of pilgrims not holding Haj permits has also decreased.

Hence, during the past years, the campaign has been focusing on enhancing the positive behaviors, including respect for the place, event and man, and the regulations. Through its contents, the campaign has striven to enhance the sense of responsibility in the pilgrim, to encourage him to take the initiative to change his conduct and realize the importance of his civilized, Muslim, humanitarian role toward the pilgrims and performing the Haj rites. — SPA