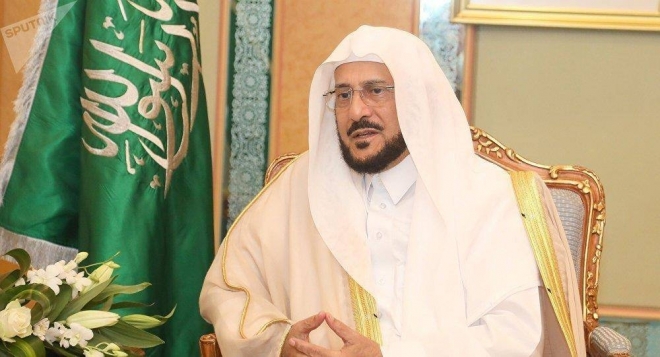 JEDDAH — The Minister of Islamic Affairs, Call and Guidance Sheikh Dr. Abdullatif Bin Abdulaziz Al Al-Sheikh will launch next Sunday the largest Haj awareness campaign entitled "Haj is a call and a straight approach 1440H" and is to be implemented by the ministry for the first time until the end of this Haj season, Saudi Press Agency (SPA) said Thursday.

The campaign aims at consolidating the purposes of Haj among pilgrims, warning against using Haj as an area to raise any doctrinal or political slogans, cooperating with security forces to achieve security and safety of pilgrims, and showcasing Saudi Arabia's great efforts in the service of the Two Holy Mosques, pilgrims, and visitors.

In another development, Minister of Haj and Umrah Dr. Muhammad Saleh Bin Taher Benten paid an inspection visit to the Haj Guiding Foundation of Iranian pilgrims on Wednesday to acquaint himself on the readiness of the office to serve pilgrims.

During the visit, the minister was briefed on the operation plan of the Foundation for this year's Haj season. The meeting also dealt with the services provided by the Kingdom for pilgrims including transportation, housing, nutrition, awareness, and others, which make it possible for pilgrims to perform the pilgrimage easily and safely.

Meanwhile, a total of 859,220 pilgrims have arrived in the Kingdom till Thursday evening, according to statistics issued by the Saudi General Directorate of Passports (Jawazat) on Friday.

The head of the Office of Pilgrims’ Affairs of Turkey Ramzi Berjan lauded the Kingdom's great service to pilgrims and their comfort, and its keenness every year to provide more facilities for pilgrims so they can be comfortable during their stay in the Kingdom until their departure to their homelands.

He said in a statement after meeting with the Chairman of Board of Directors of Pilgrims Guiding Foundation for pilgrims of Turkey and Muslims of Europe, America and Australia Tariq Bin Muhammad Angawi that those responsible for the affairs of the pilgrims of Turkey appreciate all the efforts of the authorities concerned with Haj and pilgrims’ affairs.

He added, they are keen to meet with them for consultation and continuous discussion to further upgrade the services provided to pilgrims to their highest levels, while also praising the work of the Ministry of Haj and Umrah, and the services and facilities offered to pilgrims to perform their rituals conveniently, easily and safely.

In Madinah, the deputy head of Brunei's Haj Mission Hisham Mayden praised the efforts of the Kingdom, led by the Custodian of the Two Holy Mosques King Salman and Crown Prince Muhammad Bin Salman in caring for the Two Holy Mosques, pilgrims and Umrah performers.

In a statement to SPA, Mayden said that the interest of King Salman in the comfort of the guests of the Holy Mosque is not surprising, citing the monarch's leading status at the Islamic arena. He pointed out that the Kingdom has focused its attention on serving pilgrims and has provided the finest security, as well as health services for them.

In Bucharest, Saudi ambassador to Romania and Moldova Abdulaziz Bin Muhammad Al-Aifan bade farewell to Guest Pilgrims of the Program of Custodian of the Two Holy Mosques from Moldova for Haj this year 1440AH.

Al-Aifan said that the program comes within the framework of the Saudi government's care for Islam, Muslims and pilgrims. The pilgrims expressed their thanks to the Kingdom and its leadership for serving the Two Holy Mosques and pilgrims. — SPA