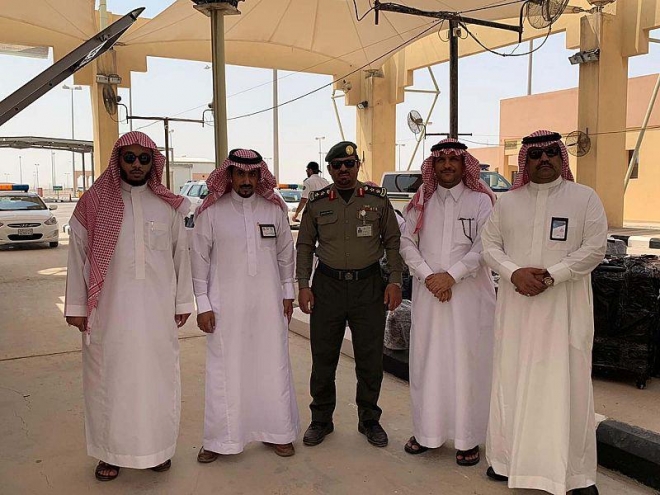 RIYADH: Al-Batha Border Port between Saudi Arabia and the UAE has received the first group of pilgrims coming from Russia to perform Hajj rituals, the Saudi Press Agency reported on Saturday.

Upon arrival, they were received by the head of the port, a number of its senior staff and representatives of the Ministry of Hajj and Umrah.

So far, the number of pilgrims who have arrived in Madinah since the start of the current Hajj season has reached 555,338 according to statistics issued by the city’s Hajj Committee.

The data showed that 393,719 pilgrims subsequently left Madinah for Makkah.

On Sunday, the minister of Islamic affairs, call and guidance, Sheikh Dr. Abdullatif Al-Asheikh, will launch a Hajj awareness campaign, aiming to consolidate the purposes of Hajj among pilgrims and warn against using it as an opportunity to raise doctrinal or political slogans.

It will also promote cooperation with security forces to maintain the safety of pilgrims, and highlight Saudi Arabia’s efforts in the service of the Two Holy Mosques, pilgrims, visitors and Umrah performers.

The Ministry of Health also started the implementation of its annual program “Hajj Health Adviser,” in line with the ministry’s aim to protect the health and safety of pilgrims, citizens and residents. The program seeks to provide them with medical advice and guidance through the 937 Service Center and the ministry’s Twitter account @saudimoh.

Last year more than 1.75 million pilgrims from abroad performed Hajj, according to figures from the Saudi General Directorate of Passports.