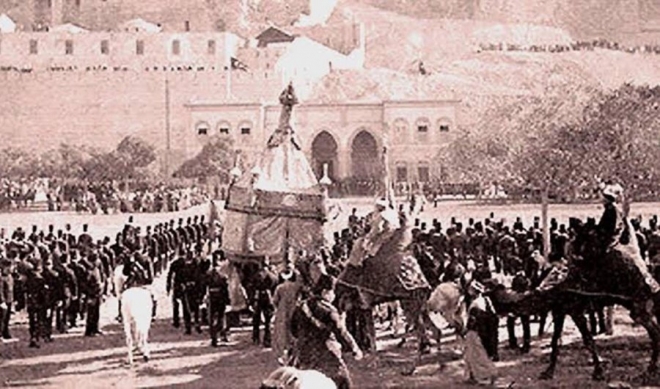 CAIRO, JEDDAH: For centuries, every year during Hajj the Kiswa for the Kaaba arrived on a camel’s back all the way from Cairo to Makkah, following a precarious journey inside a ceremonial litter known as the Mahmal.

From the reign of Al-Zahir Bebrus until the era of King Fuad of Egypt in the 1920s, the passage of the Mahmal through hundreds of miles of barren desert was an integral part of Hajj.

Residents of Cairo would be dazzled by the celebrations marking the Mahmal’s departure. Egyptians knew that the production and transportation of the Kiswa was an honor given only to them by a succession of sultans and caliphs. Research conducted by Doris Behrens-Aboseif of the University of Munich has traced the origin of the Mahmal to Shajarat Al-Durr, wife of As-Salih Ayyub, the last Egyptian sultan of the Ayyub dynasty (13th century).

Other researchers say the tradition of the Mahmal began in the 14th century during Fatimid rule.

According to Dr. Mohamed Ahmed Ibrahim, professor of Islamic history at Cairo University, during the era of Ottoman Gov. Muhammad Ali Pasha and his children, celebrations centered on the Mahmal convoy began about a month before Hajj.

Dar Al-Khoronfosh, a workshop set up in the early 19th century in Cairo’s Al-Gamaleya district, had been selected for the task of making the Kiswa. That role lasted until 1962.

A triangular dome embroidered in gold, silver or silver gilt wires and colorful silk appliques preserved the Mahmal’s precious cargo. It was adorned with the name of the caliphate, sultan or pasha on the side, and a verse from the Qur’an on the front of the Mahmal’s cover.

Before the start of the journey, streets and shops were ceremonially decorated as the Mahmal convoy toured Cairo for three days.

The camel carrying the Kiswa was accompanied by a caravan of camels lugging supplies and pilgrims’ luggage, alongside soldiers who guarded the procession all the way to Hijaz.

Sufi worshippers would walk just behind the Mahmal, beating drums and holding aloft banners, accompanied by clowns known as Afarit Al-Mahmal. The occasion was a major annual event, with Cairo’s governor and his deputy or their representative in attendance.

In Cairo’s Castle Square, soldiers would line up with their weapons on the arrival of the invitees: Renowned scientists, royals, dignitaries, merchants, and senior officials of the khedive’s office.

The official ceremony was followed by the firing of 21 rounds of artillery and the playing of the anthem of the khedive, who would stand and salute.

After that, the convoy’s leader followed behind the Mahmal in his horse along with his successor.

According to Ibrahim, the Kiswa procession toured Mohammed Ali Street and the Selah market, then headed to Bab Zuwailah Road and parts of old Cairo, and ended at Al-Hussain Mosque.

The actual journey to Makkah began with the Mahmal convoy’s departure from Cairo in the direction of the Red Sea and onward to the city of Suez, where ships docked at the port welcomed the cavalcade of pilgrims, soldiers and camels.

Once Hajj had been completed, the Mahmal returned to Cairo bearing the Kaaba’s used Kiswa.

The fabric was typically cut into pieces and distributed to nobles and princes. Some of these pieces can still be found in the tombs of royal family members, where their presence is regarded as a form of blessing.