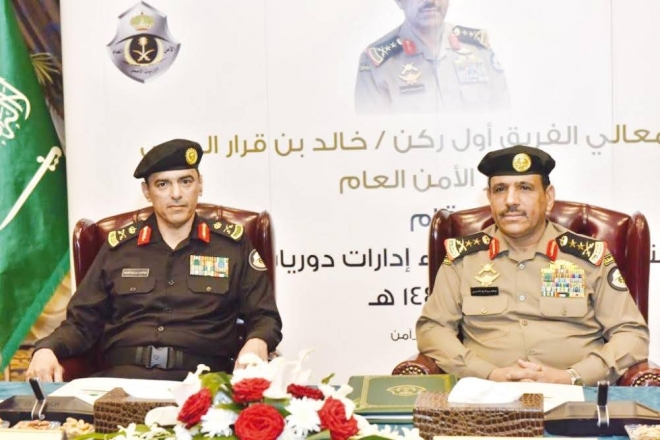 MAKKAH/JEDDAH — Director General of Public Security Gen. Khaled Bin Qarar Al-Harbi has unveiled plans for the security patrols in the Haj Security Forces that are participating for the first time in the Haj security operations as an independent administration for public security.

The event was accompanied by a mini workshop showcasing repair of several weapons used by the security patrols. This mini workshop impressed the Director General of Public Security, who issued directives to hold similar workshops for the security patrols in the Western Region. It will contribute to the speedy repair of malfunctioning weapons and save time and effort. He stressed that the requirements should be completed as soon as possible so that they can be inaugurated in the near future.

The Haj Security Forces Command for Security Patrols are carrying out the security and organization plans for a distinctive Haj season that reflects the real image and the efforts being exerted in creating a special force for countering violations in the holy sites. This force will bear the name “The Rapid Intervention Force for Security Patrols”, so as to keep pace with the launching of the new high-speed vehicles for the security patrols that will participate during this year’s Haj in the holy sites and outside them.

In a related development and during the second conference for Haj Security held on Wednesday at the headquarters of Public Security in Mina, Assistant Commander of Haj Security Forces for Security Patrols Maj. Gen. Abdulaziz Al-Mus'ad said that eight authorities come under the Command. Of these, five authorities worked during the past years. They are the checkpoints of Makkah and the holy sites and the gateways to them, and the checkpoints at the gateways to Jeddah and Taif. Meanwhile, the remaining three will function during the Haj season this year. They are the Tasks Command and Support Force, the Special Force for Combating Negative Phenomena and Beggary, and the Central Area Command.

As to the Commander of Taif Police Tasks at Al-Behaitah Checkpoint, Maj. Gen. Ali Al-Attawi said two checkpoints have been set up in Al-Hada and Al-Muhammadiah on Al-Shafa Road, six others along the road to Makkah, three inside Taif, three on Al-Hada — Al-Sayl — Riyadh Road, one checkpoint in Qarn Al-Manazil and another in Wadi Mahram.

Answering a question by Okaz at the press conference, Maj. Gen. Al-Attawi said: “The road security patrols are monitoring violators and those attempting to circumvent the roads. There is coordination with the Mujahideen to hand over the smugglers or those who transport violators to the screening checkpoints in Al-Hada and Al-Behaitah to prevent them from reaching the holy sites illegally.”

The Jeddah Police Tasks Commander Brig. Gen. Muhammad Aal Saqr has disclosed that the police have detected fraudulent Haj establishments. He also said that they have arrested several people and detected offices that transport pilgrims from Jeddah to Makkah. They have been referred to the Public Prosecution.

Meanwhile, the Makkah Police Tasks Commander Maj. Gen. Fahd Al-Ossaimi has said that there is a security force comprising officers and privates for grouping of pilgrims in the Central Area through 7 transport stations. They also work in decongesting the crowds so as to maintain security and safety of the pilgrims, and participate with the Committee for Combating Negative Phenomena, and the tight security belt around Makkah, to prevent the illegal entry of pilgrims who do not hold Haj permits into Makkah.

As to the tasks of Security Affairs, the Commander of Haj Security Forces for Security Affairs Maj. Gen. Saud Bin Muhammad Al-Tuwairqi said their tasks are being carried out via three commands in the holy sites, crime control, investigation and administrative control command. — SG