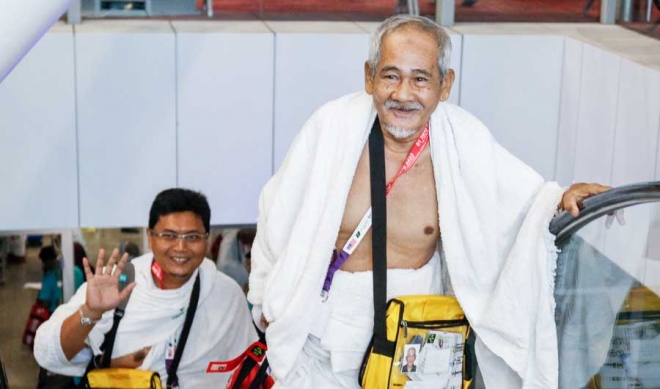 KUALA LUMPUR: Malaysian Hajj pilgrims traveling to Saudi Arabia via Kuala Lumpur International Airport as part of the Makkah Route initiative are spending only 10 minutes at both Malaysian and Saudi immigration counters before boarding.

The initiative will process 30,200 Malaysian pilgrims traveling to Saudi Arabia for this year’s Hajj.

Malaysia was the first country to implement the initiative in 2017. Indonesia followed suit in 2018.

This year, it has been expanded to Bangladesh, Pakistan and Tunisia, and 250,000 pilgrims are expected to be processed.

“We chose Malaysia as the first pilot program for the initiative because they’re very cooperative and organized. We’re in constant discussion with the Malaysian side and the relation is very good,” said Qattan.

The initiative is part of Saudi Arabia’s Vision 2030 reform plan, and the government wants to make the visa process easier for Muslims who want to go to Makkah and Madinah, he added.

At Kuala Lumpur International Airport, there are two halls for Malaysian and Saudi immigration, which are situated side by side.

Malaysian pilgrims first enter the Malaysian immigration hall to get their passports processed, then proceed to the Saudi hall for the visa check.

The whole process takes about 10 minutes before they are ushered into the waiting hall for boarding.

“Malaysians are very friendly people. It’s very easy to communicate and cooperate with them.”

• The Makkah Route initiative will process 30,200 Malaysian pilgrims traveling to Saudi Arabia for this year’s Hajj.

• Malaysia was the first country to implement the initiative in 2017. Indonesia followed suit in 2018.

• This year, it has been expanded to Bangladesh, Pakistan and Tunisia, and 250,000 pilgrims are expected to be processed.

Saudi immigration officer Saad Al-Qarni said he has not encountered any problems processing visas for Malaysian pilgrims as part of the initiative.

“Everything here is facilitated by the Malaysian government. It’s a good initiative because it’s easy and convenient for pilgrims,” he told Arab News.

“After processing their visa and passport, they can enter Saudi Arabia without going through immigration in Jeddah,” he said.

“I enjoy my work at immigration because we’re the first and last person to greet pilgrims at the airport, and I always try to leave a good impression on them.”

Malaysian pilgrim Maznah Bashar, 60, said she was both excited and anxious about going to Makkah for Hajj for the first time.

“I went to Makkah for Umrah before, but it’s not the same experience as we didn’t go to Arafat, Muzdalifah, Mina and many more (places),” she told Arab News.

“Before this, I didn’t enjoy the long wait at Saudi immigration in Jeddah, but under the Makkah Route initiative, the whole process took a mere 10 minutes and they treated us very well,” she said.

“After we arrive in Jeddah, a bus will await us at the airport and will send us straight to our hotel. Even our luggage will be sent directly to the hotel. The system is very fast.”

But Bashar said the immigration hall “felt a bit crowded as there were more than 400 pilgrims processed” there.

Zaifizar bin Zainal Abidin, 42, a Malaysian pilgrim traveling with his wife and daughter, told Arab News that the initiative “helps give us peace of mind, especially for us who have to travel for a long period of time.”

He said: “I’m excited to go to Makkah. It’ll be the first and probably the only time I’ll experience Hajj together with my wife and daughter.”