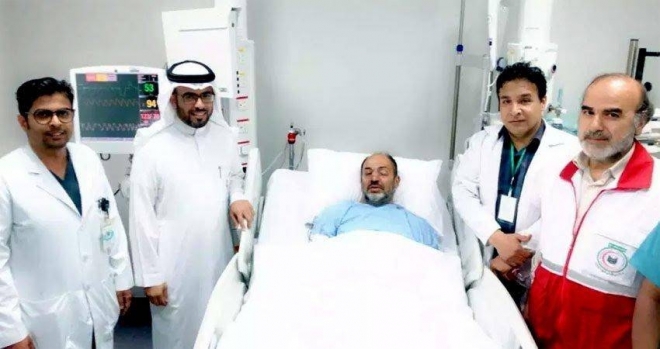 MAKKAH — A surgical team at King Abdullah Medical City here restored the eyesight of a 58-year-old Iranian pilgrim after an operation to remove a tumor in the pituitary gland.

The Saudi Ministry of Health said the Iranian pilgrim’s case was received at King Faisal Hospital in Makkah. After medical tests, it was established that the patient was suffering from a bleeding type of tumor in the pituitary gland impairing eyesight in both eyes. Also, left eye muscles were weakened. The condition of the patient necessitated an emergency operation.

The patient’s eyesight was gradually waning apart from the existence of a damage to the third brain nerve that is responsible for movement of the left eye. Moreover, the sixth brain nerve in both eyes was also damaged.

The Ministry of Health said the tumor was removed without any complication. Following the surgery the patient’s eyesight started improving with the partial strengthening of both the third and sixth brain nerves.

The patient’s condition is now reassuring and he will be transferred to the Intensive Care Unit (ICU) after his condition becomes stable in the coming five days.

The government of the Custodian of the Two Holy Mosques has provided all facilities to the pilgrims to enable them to perform their Haj rites in ease and comfort. As such, several hospitals in Makkah and other holy sites have been equipped with enough manpower and latest equipment to cater to the needs of the pilgrims.

Meanwhile, the Center for Neurological Sciences in the King Abdullah Medical City has conducted many rare specialist operations of high quality comparable with similar surgeries in hospitals of advanced countries of the world. This is due to the high success rate and the capability to deal with the most complicated cases during the Haj season.