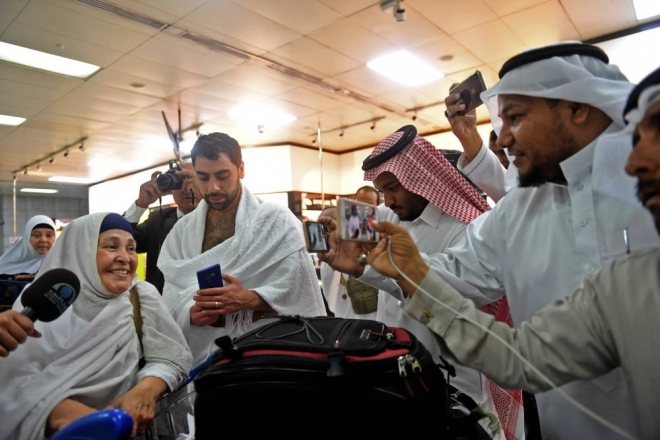 JEDDAH/MAKKAH — Families of the victims of the massacre in Christchurch mosques were accorded a warm welcome as their first batch arrived at King Abdelaziz International Airport in Jeddah on Friday.

The families are here as personal guests of Custodian of the Two Holy Mosques King Salman for performing Haj this year, the Saudi Press Agency (SPA) said.

Col. Sulaiman Al-Yousef, director of Passports (Jawazat) at KAIA, received the families at the airport with flowers, dates, Zamzam bottles and other gifts.

Col. Al-Yousef affirmed that the government of the Custodian of the Two Holy Mosques accords a great attention to the pilgrims and provides all means of service. He said the readiness of the Jawazat personnel and the level of their qualification in dealing with the best techniques contributed to the speed and accuracy of completing arrival the procedures of the pilgrims in no time.

Col. Al-Yousef said passport counters at the airport have been increased from 140 to more than 200 so as to quickly process the arrival and departure formalities.

"It will not take more than 20 seconds to process the passport of a pilgrim," he said.

The reception was attended by New Zealand Ambassador to the Kingdom James Monroe and a number of officials.

Ambassador Munro stressed that the invitation of King Salman is an exceptionally noble gesture.

This move, he added, is highly appreciated by New Zealand people.

Under the King's program for Haj and Umrah as many as 6,000 pilgrims have arrived from various parts of the world. They were 53,747 last year.

The Ministry of Islamic Affairs, Call and Guidance which is supervising the program has prepared a number of new and well-equipped buses for their transport.

As many as 1,516,101 pilgrims have arrived in the Kingdom from various parts of the world to perform the Haj this year with an increase of 121,045 pilgrims representing about nine percent over their umber the same time last year, according to the Directorate General of Passports (Jawazat).

According to the Jawazat, 1,412,894 pilgrims have arrived by air through KAIA and Prince Muhammad Bin Abdul Aziz International Airport in Madinah, 86,359 by land and 16,848 by sea.

A total of 821,792 pilgrims have arrived in Madinah to pay homage to Prophet Muhammad (peace be upon him) and pray at his mosque.

Of them, a total of 654,817 have completed their visit to Madinah and left for Makkah while 167,130 are still remaining in the Prophet's City.

The Ministry of Health announced that it has prepared 17 hospitals and 128 health centers in Makkah and the holy sites to provide curative and preventive medical health services to the pilgrims.

It said there are nine general hospitals in Makkah and eight in the holy sites being manned by 30,000 health cadres.

The ministry said it provided as many as 1.2 million pilgrims with vaccinations and preventive services on arrival at the Kingdom's inlets.


⇐ Previous:
Hajj symposium calls for coexistence and tolerance
Next: ⇒
9,000 copies of Qur’an pulled out of Grand Mosque daily for errors