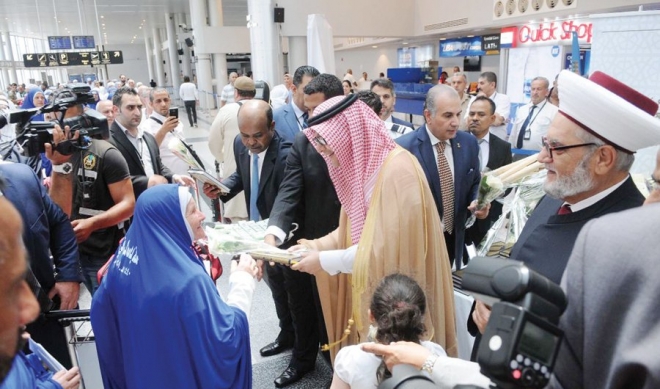 BEIRUT: The Saudi ambassador to Lebanon on Thursday joined the first batch of 20,000 pilgrims from the country leaving Beirut to perform Hajj.

The Saudi Embassy has completed 20,000 electronic visas for worshippers traveling from Lebanon to the Kingdom for this year’s holy pilgrimage.

Al-Bukhari said that 10,000 visas had been allocated to Lebanese citizens, 6,000 to Syrian refugees residing in Syria and Lebanon, and 1,500 to Palestinian refugees. In addition, visas had been issued to diplomats, international organizations and many people who had applied for a courtesy residence.

The ambassador handed out copies of the Holy Qur’an, sweets and white roses to the departing pilgrims at Beirut airport, with the help of the representative of Lebanon’s grand mufti and the director general of the Islamic Endowments, Sheikh Mohammed Anis Al-Arwadi.

“The Hajj agreement that is annually concluded between the Ministry of Hajj and Umrah and the Lebanese Hajj Committee allocates equal quotas in granting Hajj visas to all sects, as a form of respect for this duty,” Al-Bukhari said.

With a backdrop of banners, hanging inside the airport’s departure hall, bearing the slogan “Hajj is a message of peace,” the Lebanese pilgrims boarded flights with Middle East Airlines and Saudi Arabian Airlines, many of them thanking Saudi Embassy officials for their assistance.

“The Kingdom is taking care of all of God’s guests, under the leadership and guidance of King Salman and Crown Prince Mohammed bin Salman, to provide the best and highest-quality services and performance level to ease the Hajj rituals,” the envoy added.

Al-Bukhari said the electronic visas issued by the Kingdom’s diplomatic and consular missions around the world formed part of a program of initiatives aimed at streamlining travel services for pilgrims and other visitors to Saudi Arabia.

“The high religious spirituality of Hajj transcends culture and race. Hajj is a message of peace, and Saudi Arabia will not allow any political slogans in order to respect the privacy and spirituality of this duty,” the ambassador added.

“The Saudi Cabinet confirmed last week in a statement that it would not allow the use of any religious slogans, because Hajj is a message of peace that carries very divine spirituality. One must aim for spiritual communication to perform this duty.”

Al-Arwadi said: “The means by which Saudi Arabia is helping pilgrims perform their rituals are huge by human standards. It is mobilizing all of its resources to secure and facilitate Hajj for everyone with no exceptions.”

He also thanked Crown Prince Mohammed bin Salman for following up on the achievements of the Ministry of Hajj and Umrah and the Ministry of Islamic Affairs, Call and Guidance, stressing that “Saudi Arabia is the Muslims’ shelter and whatever affects it, affects the entire Islamic world.”


⇐ Previous:
Iranian pilgrim’s sight restored after surgery in Makkah’s KAMC
Next: ⇒
Honor to serve: Saudi boy scouts are always there to help during Hajj