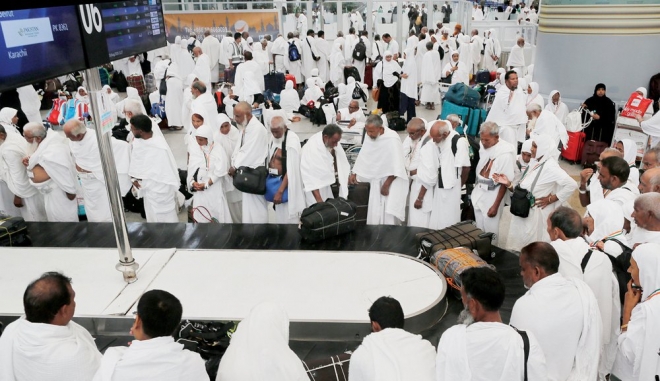 BEIRUT: Every Hajj season, Rafic Hariri International Airport is the only corridor for Lebanese, Palestinian refugees in the country and Syrians who want to perform pilgrimage in Saudi Arabia.

Those who were issued their Hajj visas were informed three months ago. According to a diplomatic source in the Embassy of Saudi Arabia in Lebanon, “the Lebanese quota is 4,000 pilgrims who receive their Hajj visa at no cost, courtesy visas are allocated to politicians who give their supporters’ names — and also receive the visa at no cost — and the embassy also gives visas to humanitarian cases such as those given last year to the parents of soldiers killed while combating terrorist organizations.”

The source added that there had been “attempts to control politicians’ applications in order to reduce any exploitation operations, which has contributed to limiting corruption.”

There are 37 Hajj campaigns in Lebanon that take care of pilgrims’ matters. Ibrahim Itani, head of the Hajj Affairs Committee, said that “the number of Lebanese and Palestinian pilgrims is stable, reaching around 20,000, and the Syrian Hajj Committee is responsible for Syrian pilgrims who are not included in the Lebanese quota.”

Itani added: “This year, the authorities concerned with pilgrimage in the Kingdom increased the age of accepted pilgrims to people born in 1963 but it was restricted to those born in 1947 earlier. Priority is given to older people and those performing Hajj for the first time.”

Pilgrims are accompanied by “around 40 doctors who form the committee’s medical board.”

Itani added that: “Lebanese and Palestinian pilgrims are told not to riot. They are also forbidden from carrying any political leaflets or cash exceeding SR40,000 ($10,000). Pilgrims from Lebanon have always committed to that.”

The number of Lebanese and Palestinian pilgrims is stable, reaching around 20,000, and the Syrian Hajj Committee is responsible for Syrian pilgrims who are not included in the Lebanese quota.

But to what extent has the economic decline in Lebanon affected the people’s abilities to perform Hajj this year? Ahmed Jamal, one of the owners of Saudi-Lebanese company for Hajj and Umrah said: “There is a decline in application numbers. Last year, they were 10,000, but this year, it has declined to 6,500. Purchasing power has also dropped; people are no longer booking five-star hotels. The Hajj cost is $2,900 minimum per person and can reach $4,000.”

Campaign manager for the Fotowa lil Hajj wal Umrah, Abdulrahman El-Taweel said: “The purchasing power of Lebanese and Palestinians has declined in relation to service requests for Hajj.

“Some campaigns pay $400 per pilgrim due to them taking busy rooms far from Makkah and Madinah. Since we are a non-profit organization, the cost does not exceed $1,300.”

Hassanein El-Khalil, a managers for the El Khalil for Hajj campaign, is frustrated by the decline in economic capability.

He said: “This year, 275 applied for our campaign for a Hajj visa whereas their number reached 340 last year.”

He said: “The Kingdom’s allocation of a quota for pilgrims in every country is great. Without it, millions could not have visited the Kingdom for Hajj.

“There are two types of people performing Hajj: One that wants a decent and clean sleeping space with no interest in quality, and another that looks for five-star services, the latter’s number has declined.”

Procedures for Syrian pilgrims differ from those from Lebanon and Palestine.

Abdulrahman Nahlawi, head of the information section in the Syrian Hajj Committee in Turkey, told Arab News: “The office in Beirut was established six years ago, and the Hajj file was taken from the regime in Syria in 2012 and became under the guardianship of the Syrian Hajj Committee affiliated with the Syrian Coalition in 2013. We are responsible for all Hajj operations, and no Syrian pilgrim can go to the Kingdom without going through us, regardless of their political and ethnic orientations.

“The Syrian quota has been stable for six years, and the number of pilgrims this year is 22,500. They received their visas from four Saudi embassies in Cairo, Amman, Beirut and Istanbul. Iraqi Kurdistan is new this year but their applications are low.”

In order to register, applicants must have a Syrian passport or valid residence in their country. Syrian refugees in Lebanon cannot travel by Lebanese laws that do not allow them to return in case they decide to leave.

Nahlawi said: “Syrians who would like to perform Hajj from Syria go to Beirut through legitimate border crossings between the two countries, or go via Turkey if they are in the north of the country.

“The number of people living in Damascus or under the regime’s control who would like to perform Hajj is small. They fear security investigations upon their return.This is happened two years ago when pilgrims were referred to the Palestinian security branch, and underwent investigations to see if they belonged to the opposition or made contact with it. Last year, no one was investigated and pilgrims returned peacefully.”

Nahlawi added: “The number of people who have applied this year has reached 34,000, and the Hajj visa gives priority to the elderly with a 64 percent proportion allocated to them.

“The number of men and women who would like to perform Hajj is close, and there is no decline in applicants’ financial capabilities. We are working on controlling the campaigns’ gains so they do not overcharge.”