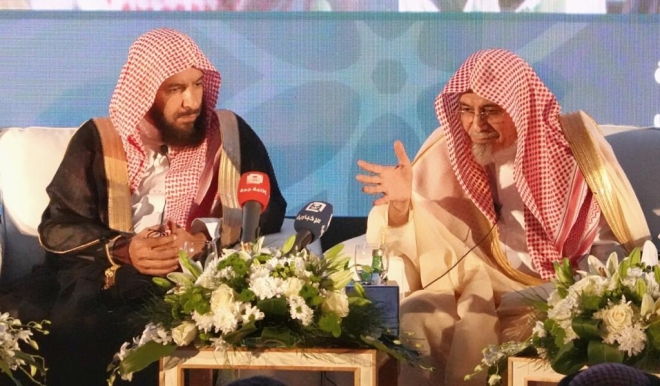 MAKKAH: The 44th annual Hajj Grand Symposium began on Monday in Makkah, with peaceful coexistence as its main theme.

Minister of Hajj and Umrah Dr. Mohammed Saleh Bentin opened the two-day gathering at the Hilton Makkah Convention Hotel. Welcoming the participants, who include Islamic thinkers and scholars from the Kingdom and across the Islamic world, he said that the title of this year’s event, “Islam: Coexistence and Tolerance,” reflects the desire of the government of King Salman and Crown Prince Mohammed bin Salman to promote a message of peace and harmony.

He highlighted the efforts made and services provided by his ministry to benefit Hajj pilgrims throughout their stay in the Kingdom. Bentin said that the king is following with great interest the experiences of pilgrims, along with the ongoing development projects in Makkah, Madinah and the holy sites.

The minister noted that two million electronic visas were issued to pilgrims this year with no problems, and said the best is yet to come as improvements continue to the services and assistance offered to visitors. He added that the government is keen to do all it can to ensure the comfort and safety of pilgrims, so they can fully devote themselves to worship and Hajj rituals.

“Makkah is currently receiving a large number of pilgrims, equal to the city’s population,” Bentin said. “It is thanks to the excellent management and advanced organizational skills that we feel that they are part of the population of Makkah. More than 350,000 people came from all over the Kingdom to serve the pilgrims, and we in Saudi Arabia are proud to serve them.”

He added that with its scientific and Islamic science themes, the symposium provides a great service to Muslims, researchers and the wider world.

Dr. Abdullah Al-Rabeeah, adviser to the Royal Court and general supervisor of the King Salman Humanitarian Aid and Relief Center (KSRelief), presided over the first session of the symposium. He hailed the Kingdom’s leading humanitarian role in providing various forms of assistance to the needy in countries around the world.

“Saudi Arabia is an Islamic country whose benevolent contributions are deeply rooted in the memory of humanity. It has provided about $92.4 billion (SR347 billion) to support 84 countries in the world between 1996 and 2019,” he said.

During the second session, which was chaired by Shiekh Saad Al-Shithri, an adviser to the Royal Court, Sheikh Saleh bin Humaid, also an adviser to the Royal Court and a member of the Senior Ulema Council, and Dr. Abdulrahman Al-Sudais, president of the General Presidency for the Affairs of the Two Holy Mosques, discussed tolerance and coexistence from an Islamic perspective.

Deputy Minister of Hajj and Umrah Dr. Abdul Fattah Mashat, who is also general supervisor of the symposium, told Arab News that Saudi Arabia is the land of humanity and has set an example for others to follow.

“We receive pilgrims from various nationalities and cultures, and we treat them equally,” he said “What we expect from them is that they focus on performing the Hajj rituals in a peaceful and secure environment.”

• Saudi Arabia is the land of humanity and has set an example to follow, says deputy Hajj minister.

• Riyadh has provided about SR347 billion to support 84 countries in the world.

Mashat added that for Muslims to practice tolerance and coexistence fruitfully, they should start by showing acceptance for, and acting in accordance with, Islam’s moderate principles.

“The culture of tolerance begins within the person, who can then promote and spread that culture. Saudi Arabian leadership and citizens are an example that clearly and practically embodies this fact,” he added.

“We don’t only have scholars from all parts of the world (at the conference), but experts from various fields of science will also discuss coexistence and tolerance. People of the same profession, such as doctors, will discuss how a physician should be tolerant and how he coexists with others. Religious scholars also will discuss the same thing.” He added that all topics and workshops in the symposium will be based around the title theme.

On Tuesday, Mashat was scheduled to preside over a session titled “Humanity in the Digital Age.” The speakers were due to include: Dr. Noura bint Mohammed Al-Kaabi, the UAE’s minister of culture and knowledge development; Sultan Al-Rumaithi, head of the Muslim Council of Elders in the UAE; Arwa Arab, assistant professor at King Abdul Aziz University’s department of psychology; and Dr. Ahmed Al-Thenayan, the Saudi deputy minister for technology and digital capacities.

Dr. Abdul Aziz Wazzan, undersecretary of the Ministry of Hajj and Umrah for Umrah Affairs and supervisor of the symposium’s executive committee, said: “The ministry aspires to achieve many goals through this Hajj symposium, including highlighting the cultural and civilizational role of the Kingdom, promoting scientific and cultural communication between Islamic scholars from around the world, focusing on the most important achievements and projects serving Muslims in the Two Holy Mosques and the holy sites, and contributing to strengthening the bonds and cooperation of the Islamic nation.”

The first Hajj Grand Symposium was held in 1977 under the title “Awareness on Hajj.” Each year it focuses on different topics related to the Hajj season and Islamic values, in a bid to promote awareness of Islam.

This year, the ministry has arranged special trips for guests to explore historic areas and exhibitions in Makkah and Madinah, as well as attending the symposium’s activities.