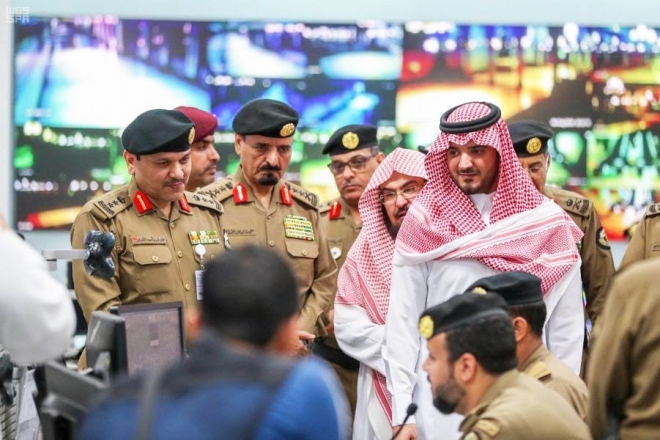 MAKKAH: Smart technologies being used and developed in the Kingdom to improve services for Hajj pilgrims were revealed at a forum held in the holy city of Makkah.

Among items discussed were latest advances in artificial intelligence (AI) and their applications to health, security, entertainment, traffic and other fields in order to enhance the whole Hajj experience for worshippers.

The minister was accompanied at the forum by head of the Presidency of State Security Abdul Aziz bin Mohammed Al-Howairini, Minister of Hajj and Umrah Dr. Mohammed Saleh bin Taher Benten and president of the General Presidency for the Affairs of the Two Holy Mosques Dr. Abdulrahman Al-Sudais.

Prince Abdul Aziz also toured an exhibition held on the sidelines of the event.

The forum was organized by the Ministry of Interior’s general department of medical services in collaboration with the ministries responsible for public and state security, Hajj, and health, the National Center for Security Operations (911), the General Directorate of Passports, the National Health Information Center, the Saudi Food and Drug Authority, Umm Al-Qura University, the Saudi Red Crescent Authority and the Holy Makkah Municipality.

“Despite the fact that Makkah will have received some 1.2 million Hajj pilgrims by the first day of the Dhu Al-Hijjah, the daily life of the 1.6 million residents of the holy city went smoothly and unaffectedly,” Benten said in his speech to delegates.

“Today, we have more than 1.5 million pilgrims in Makkah and around 300,000 others in Madinah. Even so, the city has not been disordered and residents have not noticed the big number of visitors that have entered the city.

“Everything is going smoothly, thanks to the efforts being exerted by the Saudi government to make the pilgrims perform their rituals in ease and comfort,” added Benten.

The minister noted that all Hajj visas had been issued electronically, meaning most pilgrims had not needed to visit the Saudi Embassy.

He said his ministry had details on 60 million Muslims who had earlier performed Hajj. “We use this information to better help them through knowing what places they would like to visit and what their desires are. We now have a good data infrastructure which can help us greatly to introduce even better services to pilgrims in the future.”

And the Hajj experience has been hailed by pilgrims. Feedback from last year’s visitors showed 86 percent to be satisfied with the services provided to them, said Benten, who also spoke about some of the latest technologies being used.

“All pilgrim buses are equipped with tracking devices, so we know who the driver is and how much time is needed to transport pilgrims from one point to another. We also know when a bus has stopped due to a technical problem.”

Technology had also helped to monitor accommodation units. “And we have information about all the companies that provide pilgrims with meals and who the workers in those companies are.”

Benten pointed out that plans were in the pipeline to recycle pilgrims’ waste, especially plastics, into useful materials, and develop archeological sites in Makkah and Madinah to improve the Hajj experience.

Assistant professor of AI at Umm Al-Qura University, Tahani Al-Subait, told Arab News that based on the data gathered to date new smart apps were being developed to serve pilgrims.

“We can create applications in all fields, like health, security, entertainment, traffic, movement of people, etc. AI can be utilized in everything you can imagine. I can’t imagine there is a field where AI cannot be used,” she said.

One technology being operated by the Ministry of Health during this season’s Hajj was a robot that could remotely provide medical consultations and checks.

“A physician in Riyadh, for instance, can provide medical assistance through a robot in the holy sites. The physician can monitor the robot and make it take the patient’s temperature and check their pulse with a stethoscope. The doctor can also give the robot an order to find a specific patient at a specific ward in a hospital in order to examine them,” Al-Subait added.