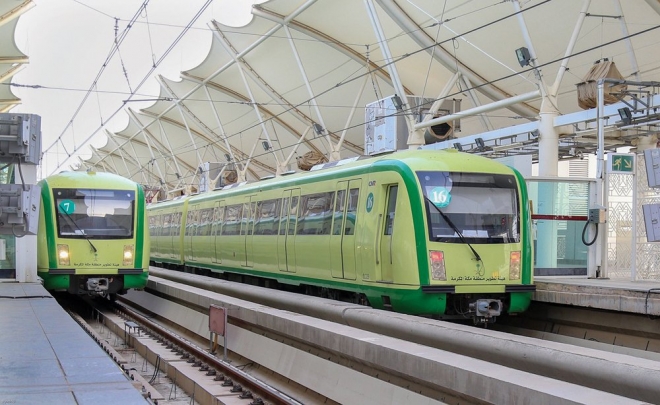 RIYADH: The Al-Mashaaer Al-Mugaddassah Metro Project (MMMP), a shuttle train service that operates during the Hajj season in Makkah, introduced a new means of transport for pilgrims, easing traffic bottlenecks by reducing congestion.

The project includes nine overground stations, each with a 300-meter-long platform that can be accessed via specific routes to the waiting areas under the stations, each of which can accommodate more than 3,000 people.

According to the Makkah Region Development Authority, the shuttle train will transport more than 360,000 pilgrims during this year’s Hajj season.

The MMMP South Line links the southeast of Arafat and southwest of Mina through Muzdalifah. The trains pass through three stations in Arafat, Muzdalifah and Mina. The track stretches over roughly 20 km, and the driverless trains run at speeds of 80-120 km per hour (kph).

The trains are equipped with the latest technology to ensure comfort and safety. (Supplied photo)

The metro line, which only operates for the Hajj season in Makkah — and has the highest capacity of any metro in the world — is used as an exclusive shuttle train for pilgrims between Makkah, Mount Arafat, Muzdalifah and Mina.

It helps immensely in reducing traffic bottlenecks caused by thousands of buses and cars during the peak season.

The trains, which can travel up to 300 kph, are equipped with the latest technology to ensure comfort and safety.

Hajj, which is the largest annual gathering of people in the world, attracts pilgrims from across the world. The railway has replaced around 50,000 buses, promising a safer and more comfortable pilgrimage with less congestion.

The Hajj Affairs and Transport Department said it is committed to using the best urban planning and smart technology to ensure that the pilgrimage is safe and comfortable.

The Al-Haramain high-speed railway, which is part of the MMMP, opened to the public in October 2018, whisking travelers between the holy cities of Makkah and Madinah through Jeddah and King Abdullah Economic City (KAEC) in Rabigh.

Speaking during the opening, Rumaih Al-Rumaih, chairman of the Public Transport Authority, said: “It is a moment that marks a historical national turning point in the Kingdom’s modern transportation.”

Sharing his experience of traveling on the Al-Haramain Railway, Mohammed Marghalani, a hotel manager in Riyadh, told Arab News: “It was a great experience, and I’d love to do it again. It’s faster than the car, thus saving time. I traveled between Jeddah to Madinah, which took two-and-a-half hours. If you use a car, it will take double the time.”

The railway system hires Saudi youths during the holy season, with opportunities for them to work as security guards and administrators.

The authorities use a specialized security company to organize the boarding of pilgrims onto the trains during Hajj.

The company trains Saudis in Hajj security services, and recruits Saudis who speak languages other than Arabic, providing them with intensive training to help pilgrims from around the world.

“It’s very clean. The staff working on the train and in stations are friendly and cooperative, displaying an excellent sense of hospitality and high standard of hygiene, with very clean toilets,” said Marghalani.

To prevent overcrowding, station areas are restricted so that undocumented or ticketless pilgrims cannot enter.

The Al-Haramain Railway project is in line with the objectives of Vision 2030 reform plan, as it should help increase the number of visitors to the Kingdom’s holy places. Zafar Hasan, who traveled recently from Makkah to Madinah using the railway, described it as a “very helpful transport initiative.”

Hasan told Arab News: “I am very impressed with the high standards of transportation between the two holy cities of Makkah and Madinah.”

“Tickets can be booked easily online. I bought an economy-class ticket to travel with my family and had a great trip. It was very quiet, safe and fast. The train was exactly on time and we had a very smooth ride.”

He said the ticket price is relatively high, but in view of the safety, high speed and luxury travel, it is a good method of transport between the two holy cities for Hajj, Umrah and Ziyarah.

Tickets for the Al-Haramain Railway can be purchased online (www.hhr.sa), as well as over the phone (920004433) or direct from ticket offices between 8 a.m. and 9 p.m.