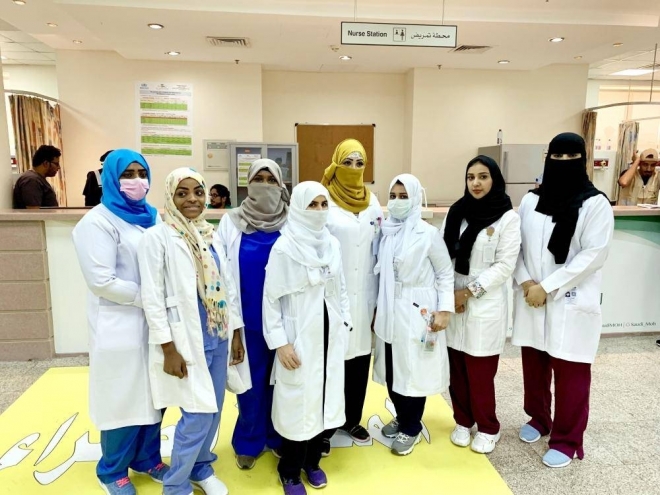 MAKKAH — Saudi female nurses from across the Kingdom and seconded by the Ministry of Health to work in its hospitals in the holy sites during the Haj season, have said they were ready for the any forthcoming tasks.

Nursing specialist Hanan Ali, who is participating for the first time in the Haj mission, expressed happiness to take part in serving the pilgrims. She said that she joined work at the King Abdulaziz Hospital and Oncology Center in Jeddah two years ago. Her aim is to gain experience and have the honor to serve the pilgrims.

As to the female specialist Mi’aad Al-Dowsari, who has been assigned to work in Mina Al-Wadi Hospital, she said that she is participating in the Haj season for the third time consecutively, after being seconded from Bisha governorate. She expressed happiness to serve the pilgrims. She stressed that she made sure to participate this Haj, making it the third year, due the great experience she gained during the past two years’ Haj.

She further said: “We got facilities from the Ministry of Health and I got support from my family due to my keen interest in gaining the honor to serve the pilgrims in the holy sites so as to win the reward from Allah Almighty, especially since the pilgrims pray and supplicate for us when we serve them. This has a great positive impact on us and gives us an impetus to increase our efforts multifold.”

Rawan Ali, who is a specialist working in the Emergency Room at Mina Al-Wadi Hospital, said: “Participating in providing services to the pilgrims during the Haj is a wish for many people as it combines between the honor to serve the Guests of Allah and getting rewards from Allah Almighty.”

Director of Nursing at Mina Al-Wadi Hospital Hanan Al-Gharawi, she said: “I’m participating for the 15th time in serving the pilgrims. I express my thanks to the Ministry of Health for extending its big support to its male and female personnel it seconded to work in the holy sites health facilities. Saudi women have proved their capability to work in all fields.”

She said that she started taking part in serving the pilgrims during Haj some 15 years ago when she was just a nurse holding a diploma. She added that she continued pursuing her studies and obtained her bachelor’s degree. At present, she is doing postgraduate studies to obtain her master’s degree in nursing. She further said that her daughter has joined the field of nursing as well.

Al-Gharawi stressed that the Ministry of Health has given the nursing staff participating in serving the pilgrims intensive training programs and courses on contagious diseases and the roles of the medical, healthcare and emergency teams in treating such cases.

These training programs and courses were conducted in major regions before the start of the Haj season. The staff seconded to work in the medical facilities of the holy sites during Haj underwent training programs in the hospitals of the holy sites. The objective was to provide the preventive and medical services of the highest standards to the pilgrims. The nursing staff have also received training on how to deal with various cases of illness, Al-Gharawi added.