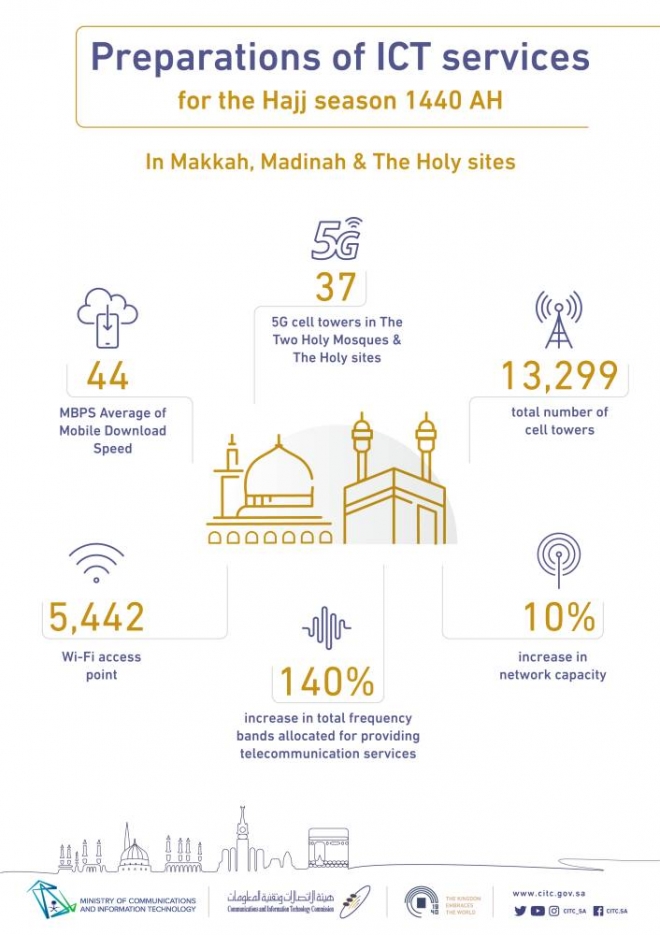 MAKKAH — The Saudi Communications and Information Technology Commission (CITC) has announced its full readiness of the telecom networks to serve the pilgrims around the holy cities of Makkah and Madinah.

This year the total network capacity was expanded by 10 percent, provided by more than 13,000 cell towers, with 37 sites supporting 5G technologies in the Two Holy Mosques and in other holy sites.

CITC, the Saudi telecom regulator, presented its coordinating efforts aimed at enhancing the ICT services to be experienced by millions of pilgrims arriving to the Kingdom for Haj. As a result of these efforts, the average mobile download speed in Makkah and Madinah has grown exponentially to reach 44 Mbps, which is an 80 percent rise compared to last year. The number of public Wi-Fi wireless access points also went up to reach 5,442.

In a statement, Majed Al-Mazyed, CITC deputy governor for Technology and Infrastructure, has assured that all concerned government authorities and telecommunication companies had set up a robust and efficient cooperation under one vision of serving Guests of Allah, by facilitating their use of ICT services during Haj and Umrah seasons.

The huge investments directed by Saudi government over the years toward developing the ICT infrastructure in Haj areas has made adopting the most up-to-date technology a natural and feasible approach. Comprehensive inspection tours are being conducted by CITC officials and operators’ staff around-the-clock, screening networking sites and service coverage areas to measure quality of services,

ensuring the availability and quality of telecom service provided to the pilgrims.

It is worth mentioning that ICT infrastructure in Makkah and Madinah is some of the best in the world, a result of intensive utilization of latest technologies, such as broadband 4G and 5G technologies. All operators had continuously developed their networks to facilitate providing sufficient capacity and highest quality of ICT services for the Haj season, which every year becomes one of the largest gatherings of people in the world.