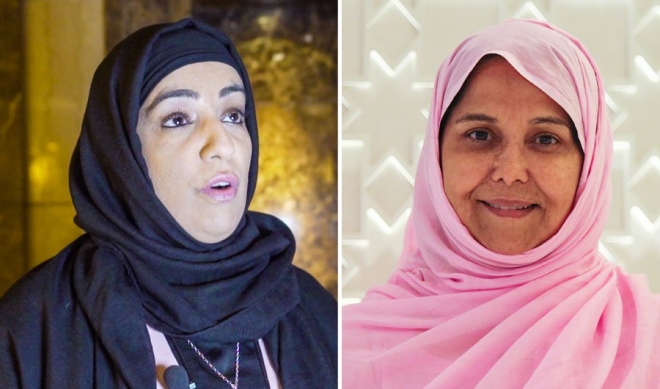 Both women are members of the All-Party Parliamentary Group for Hajj and Umrah, and they work with the British and Saudi governments to ensure that UK pilgrims have the best experience possible.

“Basically I managed to get MPs from different political parties together so that we could set up the organization, which I chair, to ensure the experience of people performing Hajj and Umrah is a good one, both for the UK and the Kingdom,” Qureshi told Arab News.

“Our aim is to try to let the British government and the Saudi government know some of the issues and challenges that we had, and try to work constructively so that we can make the experience of the people who come for Umrah and Hajj a good one.”

For Shah, being a member of the parliamentary group is of particular importance to her and her constituents. “Over 50 percent of my constituents are Muslim,” she said. “I do a lot of work on Islamophobia etc, but also with Hajj and Umrah, the experiences of my constituents are very important to me because many of them make the sacred journey every single year and throughout the year for Umrah.

The parliamentary group deals mainly with the Saudi Embassy in London, and Qureshi has had a good experience with the Kingdom’s representatives in the UK. “I have to say that the Saudi Embassy has been absolutely brilliant,” she said. “Whenever I have had to call them about one of our constituents who has got an issue because someone in his family has passed away, they have been very kind and compassionate, granting the visas to come.

“I really want to actually take the opportunity to thank the Saudi Embassy in the UK, but also the Kingdom, for the way things are done here to make the experience of Hajj and Umrah a good one. I have to congratulate the Kingdom for the tremendous work they have done over the years to make sure that the experience is a comfortable one, and I am looking forward to Hajj over the next few days.”

A little over two weeks ago, Qureshi had no plans to perform the Hajj this year, but an unexpected phone call changed her plans. “For me it is a dream to be here,” she said. “The call came very much out of the blue, inviting me to come to Hajj. I was actually booked on a flight elsewhere and that changed at the very last minute.

“For me, as a Muslim, for God to call me to be here, is such a humbling experience, such a privilege, such an honor to be here among so many Muslims from around the world who made the journey.”

The Kingdom’s sweeping reforms over the past three years to empower women have not gone unnoticed in the UK. “I think it is great that women are able to drive, and that they don’t need to get permission from a guardian to be able to do things,” Qureshi said. “It is a good initiative and I think it will make the lives of women far better. It is something that people like myself, we welcome very much.”

This will be Qureshi’s second Hajj. The last time was 20 years ago, when Makkah, Mina and Muzdalifah were very different places from what they are now. “The first time, I was quite young, and with my mother,” she said. “Most of these hotels near the Grand Mosque were not there, and now I understand in Mina there are air-conditioned camps, trains and food, and many other things available.”

For Shah, it is a first visit to the Kingdom, a journey she has been eager to undertake her entire life. “I landed in Madinah, had an amazing time there, went to Al-Masjid An-Nabawi, spiritually it was very important for me to make that journey , then we arrived here in Makkah on the new train, which was really interesting.

“The new investment that the government has put in is very impressive and has made the journey very pleasant.

“Then landing here in the Holy City, in Makkah, that first experience of raising my gaze to see the Kaaba was absolutely amazing. It is one of those moments you carry with you for the rest of your life. It is indescribable to anyone, because the emotion is so internal you really feel it.”