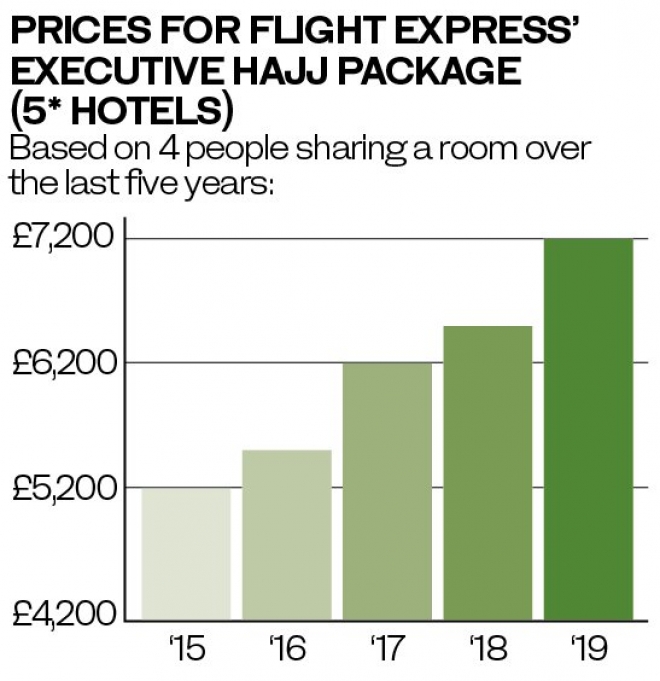 LONDON: British pilgrims are struggling to keep up with a dramatic jump in the cost of traveling to Saudi Arabia to perform Hajj.

More than 20,000 people make the pilgrimage from the UK every year but spiralling air tickets and hotel prices have ramped up prices in the past five years.

The plunge in the value of the pound over concerns about the UK’s withdrawal from the European Union has only added to the financial cost of visiting the Kingdom.

This year pilgrims from the UK will pay somewhere between £5,000 and £11,000 to perform the pilgrimage, according to tour operators.

The fifth pillar of Islam, Hajj must be performed by Muslims once in a lifetime as long as they can afford it and are healthy enough. But there are fears that some Muslims are being priced out of this duty.

Hajj packages in the UK vary according to hotel star ratings, how close hotels are to the Grand Mosque in Makkah and the Prophet’s Mosque in Madinah, whether flights are direct or not, and whether packages are “shifting” or “non-shifting”.

Mohammed Patel, 47, is a licensed Hajj operator and the owner of Flight Express travel agency in north London. He has been taking Brits on the pilgrimage annually since 1999.

This year, his non-shifting executive Hajj package cost £7,200, based on four people sharing a room. The price includes 5-star hotel accommodation in Makkah and Madinah, return flights, the slaughter of an animal in accordance with Hajj requirements, transport within Saudi Arabia, half board meals throughout the journey, guidance on how to perform the Hajj, and accommodation in air-conditioned camps in Mina and Arafat.

Patel said the price increase can be attributed to many factors, including the high cost of flights that airlines know they are able to charge during the Hajj season, the increasing cost of hotel rooms, the decline of the British pound against the dollar over the last two years, and inflation in general.

“We’re paying an average of between £1,100 — £1,400 per ticket which is maybe twice or three times the actual ticket value. Airlines know that there is a demand during this season,” Patel said.

The cost of staying in hotels in Makkah and Madinah during the Hajj period has also increased over the years due to demand and the introduction of two new taxes in the Kingdom at the beginning of 2018.

Value Added Tax (VAT) is collected by the General Authority of Zakat and Tax (GAZT), and another 5 percent levy on each occupied hotel room that is rated over three stars is charged by the Ministry of Municipal and Rural Affairs.

“Hotel rates are going up on a yearly basis, and if we want to stay in them, we have no choice but to pay,” Patel said.

The British pound has fallen heavily against the dollar since the Brexit referendum in 2016, and sterling hit a 28-month low against the US dollar at the end of July as concerns grow that the UK will leave the European Union without a deal.

Because the Saudi riyal is pegged to the US dollar, the pound is now worth fewer riyals and this is problematic for Hajj operators who pay large bills in sterling.

“The exchange rate makes a difference. Whereas previously we’d exchange at SR5.5-SR6 for every pound, now £1 is worth SR4.5-4.7. The lower the rate is, the higher the cost will be for us,” Patel said.

“When you’re paying bills worth hundreds of thousands or millions of riyals for overall services, the exchange rate makes a massive difference.”

Despite the great expense involved, this does not put off more than 20,000 British pilgrims performing Hajj every year.

Shaheen Doctor said she had wanted for a long time to perform Hajj when she finally made the pilgrimage from Britain last year.

While the journey with her husband and two children surpassed her spiritual expectations, the trip cost about £24,000.

“We don’t regret it and believe that God will recompense us for this amount,” the 43-year-old nurse from Hackney, London, told Arab News. “This year, however, we won’t be going abroad during July and August.”

Yusuf Bham, a 51-year-old civil servant from Nuneaton, is performing Hajj this year and is looking forward to the “once in a lifetime event.”

He said that although he has had to save to be able to perform Hajj, he “enjoyed making those sacrifices” because they are worth it.

Mohammed Patel in Arafat during a previous Hajj. (Photo: Supplied)

Mohammed Patel, 47, runs Flight Express, a travel agency in Finsbury Park, north London, and has been leading Hajj groups of British pilgrims to Saudi Arabia since 1999.

He told Arab News that although he and his team face different challenges every year, Saudi authorities are continuously making efforts to improve the Hajj experience for more than 2 million Muslims who arrive in the Kingdom for the annual pilgrimage.

“Generally, I can say hand on heart, they do a magnificent job in Saudi Arabia considering that more than 2 million people are attending Hajj in a small area. They have a good set-up.”

Patel says that despite the “very hard work, stress and six to seven months of planning prior to Hajj” that is involved in order to make his clients’ pilgrimage as smooth as possible, he continues to lead Hajj groups every year.

“Every year we have new experiences and learn something new. We strive to improve every year because we want to better our clients’ Hajj experience for the next year.

“My motivation is to serve pilgrims. I thank God for giving me the licence to operate as a Hajj operator, and the good reviews that I get every year encourages me to serve the pilgrims.”


⇐ Previous:
Hajj through the eyes of a Saudi veteran of the pilgrimage
Next: ⇒
From Westminster to Makkah: Two British MPs join the Hajj pilgrimage