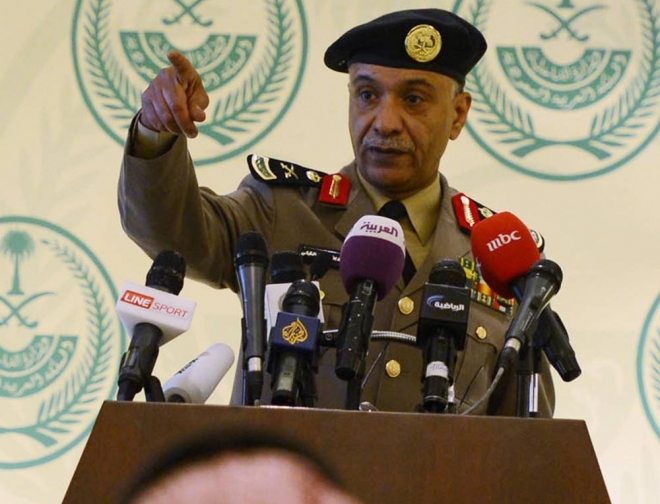 MINA – The spokesman of the Ministry of Interior Maj. Gen. Mansour Al-Turki said in a joint press conference here Thursday with spokesmen of other government agencies that the transfer of pilgrims from Makkah to the holy sites was usually by buses. There are a number of pilgrims who choose to walk from the Grand Mosque to Mina, and after their arrival in Mina, Al Mashaaer Al Mugaddassah Metro line transports them.

The official spokesman of the Ministry of Haj and Umrah Hatim Qadi lauded the successful issuance of more than 1.8 million e-visas, pointing out that this step is a qualitative leap in facilitating entry procedures for pilgrims.

He also highlighted the success of the Makkah Road Initiative (MRI), which has been applied in five countries, namely Malaysia, Indonesia, Bangladesh, Pakistan and Tunisia. More than 150,000 pilgrims benefited from the initiative and arrived in the Kingdom as if they were on a domestic flight, he said.

He also said that more than 3,000 flights carrying pilgrims arrived at King Abdulaziz International Airport in Jeddah and Prince Muhammad Bin Abdulaziz International Airport in Madinah. More than 800,000 pilgrims arrived in Madinah to pay homage to Prophet Muhammad (peace be upon him) and visit the Prophet’s Mosque and then left for Makkah. As many as 25,000 buses transported the pilgrims from Madinah to Makkah without any accidents, he added.

Qadhi also said that as many as 21,000 inspection tours were made to ensure the quality of services provided in Madinah and the holy sites, pointing out that the transporting of pilgrims from their dwellings in Makkah to Mina was set to begin on Thursday night.

The spokesman of the Ministry of Haj and Umrah said that the ministry was equipped with more than 70,000 skilled members of staff to carry out the task of transporting pilgrims to Mina, in addition to 3,000 Saudi volunteers.

He pointed out that the number of tents where pilgrims will stay in Mina and Arafat exceeded 350,000, which were fully furnished and air-conditioned. All the services that pilgrims need were available in Mina, Arafat and Muzdalifah.

The spokesman of Public Security in Haj Sami Al-Shwairikh said that the Haj process was managed by the Command and Control Center of Haj Security with the participation of all relevant government agencies providing services to pilgrims.

Al-Shwairikh pointed out that the Command and Control Center was linked with 5,909 cameras that broadcast live the movement of pilgrims in the Grand Mosque, Mina, Muzdalifah and Arafat. Moreover, the Center was linked with six permanent security checkpoints, he said, stressing that whoever did not carry a Haj permit would not be allowed to proceed to Makkah.

The spokesman also said that the latest statistics issued on Wednesday indicated that 15,018 persons who did not have a Haj permit were denied entry to Makkah and 209,741 vehicles were not allowed to enter Makkah because they violated Haj regulations.

The spokesman of the Ministry of Health Dr. Muhammad Bin Khalid Al-Abdalali said that the health situation of pilgrims was reassuring and that no epidemic cases had been recorded.

He also said that the services provided by the Ministry of Health at hospitals and health centers benefited 300,000 pilgrims. Quality, advanced and specialized services were provided in these health facilities, where 25 open heart operations, 600 cardiac catheterization operations, 1,615 dialysis sessions, 67 endoscopic operations and 400 surgeries were performed.

The spokesman of Civil Defense Muhammad Al-Hammadi confirmed that Civil Defense had prepared a comprehensive plan to be implemented by more than 17,000 personnel and more than 3,000 vehicles to protect the lives and property of pilgrims and to provide for their safety and protection.

Al-Hammadi pointed out that the Preventive Supervision Team in the Holy Sites and Makkah conducted more than 25,104 field inspection tours to ensure the implementation of fire safety and protection measures and achieve the highest level of safety, pointing out that many awareness programs had been held for pilgrims in different languages.

Journalists attending the press conference asked a number of questions.

Regarding the number of Qatari pilgrims, the spokesman of the Ministry of Haj and Umrah stressed that there were only a few despite the facilities provided and e-registration via the Internet links, which had been blocked by the State of Qatar.

However, a number of Qatari pilgrims have come to perform Haj from other countries.

Commenting on rumors that some aim to undermine the success achieved by the Kingdom during the Haj season, the spokesman of the Ministry of Interior said: “Unfortunately, some Muslims try to target Haj using any means, either by attempting to foil Haj or threatening the security and safety of pilgrims, or minimizing the efforts exerted by the government of the Kingdom of Saudi Arabia to make the Haj season successful.”

“In fact, we do not pay attention to such rumors,” he said, adding that only the pilgrims who perform Haj were aware of the great efforts exerted by the Kingdom of Saudi Arabia to make it possible for pilgrims to perform Haj rituals safely and easily. — SPA