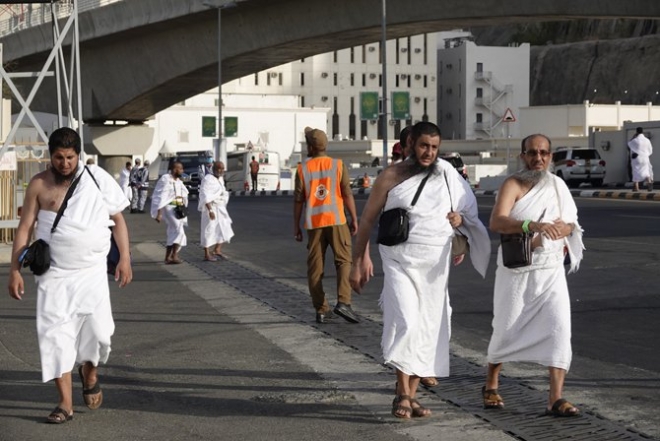 MINA: More than 2 million pilgrims gathered in the tent city of Mina as Hajj 2019 began on Friday.

From Mina, the pilgrims will head to Mount Arafat early on Saturday, an area about 20 km east of Makkah. There, the pilgrims will stand shoulder to shoulder for an emotional day of repentance and supplication at the site where Prophet Muhammad delivered his final sermon, calling for equality and unity among Muslims.

“All arms of the state have been deployed (and) we are proud to serve as ‘God’s hosts’,” said security forces spokesman Bassam Attia.

WATCH: Arab News speaks to Muslims pilgrims on the first day of #Hajj as they made their way to Mina from Makkah on the day of “Tarwiyah” https://t.co/oNMs8ph6YG pic.twitter.com/nXJ3isxn3X

As the lights of Mina came alive and the pilgrims began to settle in for the night, Arab News caught up with some of them to discuss their feelings about how their first day of Hajj went.

Mohammed Jameel, from Pakistan, is in Mina on his first Hajj. “It’s a pleasure and a blessing. We have been waiting our whole life for these moments. We are very satisfied so far and looking forward to the coming days. We are praying for all the Muslims in the world, especially for those experiencing troubles, our brothers and sisters in Kashmir, in Palestine, etc. We pray for all of them, and we pray for our families and our loved ones,” he said.

Rahaf Niyazi, from Saudi Arabia, is also performing Hajj for the first time. “Everything we’ve seen so far is amazing, and it’s such a blessing to be here. It’s better than I ever imagined it could be,” she told Arab News.

All arms of the state have been deployed and we are proud to serve as God’s hosts.

Despite the heat wave that swept through Mina at noon, the weather had cooled somewhat by night, giving pilgrims a much needed respite from the oppressive glare of the sun.

Security guards and Civil Defense volunteers swept through the camps during the day, sprinkling pilgrims with cool water, offering assistance to the disabled and helping pilgrims with directions. The famous sense of camaraderie that defines Hajj was alive and well in Mina, and by the looks of things, Hajj of 2019 is off to a great start.

Security guards in Mina told Arab News that this was the best organized Hajj yet, and things had vastly improved in the past few years. “A lot of the problems we had in the past have all but disappeared,” one said. “This year, Hajj is the best it has ever been. InshaAllah things will continue that way.”

Pilgrims pour into Mina on the first day of Hajj on Friday. (AN photo by Huda Bashatah)

One of the many unsung heroes of Hajj this year is Mohammed Saber, a volunteer physician working with a team of nurses and medical students helping worshippers on their spiritual journey. “This is a big opportunity to serve God’s guests and to serve Muslims,” Saber told Arab News.

Hajj is meant to be a great equalizer and unifier among Muslims, with pilgrims shedding overt displays of wealth and materialism.

All male pilgrims wear ihram (a two-piece seamless white cloth) and women don Islamic dress, forgoing makeup and perfume in an effort to draw closer to God and engage in intense worship for the five-day pilgrimage.

The US Consulate in Jeddah said some 20,000 US citizens and residents were expected to be at the pilgrimage.

To curb the potential for a viral outbreak of any kind, Saudi Arabia this year stopped issuing visas to people from Congo, citing the Ebola outbreak there.

VIEW OUR GALLERY FOR MORE PICTURES

• Hajj 2019 Day 1: Pilgrims arrive in Mina for the night ahead of the journey to mount Arafat

• Hajj 2019 Day 1: More than 2 million pilgrims make their way from Makkah to Mina


⇐ Previous:
Makkah governor inspects holy sites as Hajj progresses
Next: ⇒
Hajj through the eyes of a Saudi veteran of the pilgrimage