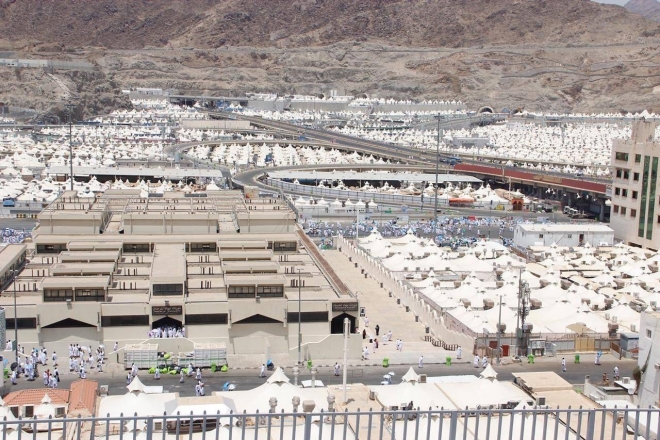 MAKKAH — Chanting Labaik Allahuma Labiak (Oh, Lord here I come) in their white shrouds, more than two million pilgrims on Friday began their Haj rituals by proceeding to Mina, the city of tents, which is five km away from Makkah.

More than 1.8 million pilgrims have come from abroad by air, land and sea. Some of them went to Madinah before the Haj to pay homage to Prophet Muhammad (peace be upon him) and some others will do this after they have completed their Haj rituals in the holy sites.

Friday was the eighth day of Dhul Hijjah, which is called Youm Al-Tarwiyah (the day of watering), where pilgrims in Mina used to drink water, water their camels, wash themselves and their clothes and make full use of the abundant water.

The pilgrims will stay the night in Mina and will proceed to Arafat, which is nine km away, for the Grand Stand representing the climax of the pilgrimage.

Pilgrims will pray Dhur and Asr together in Arafat and listen to the Haj sermon in Namira mosque.

After sunset, they will go down to Muzdalifah where they will pray Maghreb and Isha together and after midnight or early morning on Sunday go back to Mina to stone the Jamrat Al-Aqaba, slaughter their Hadi and Adahi sheep, shave and change their Ihrams into plain clothes.

Many of them will go to the Grand Mosque on the same day to do the Tawaf Al-Ifadah and on the next day will stone the three Jamrat signaling the end of the pilgrimage.

According to the security forces, the ascent to Mina was smooth and was carried out without any incidents. Some pilgrims walked the distance under the shade, others took the Mashaer train and some of them went by bus.

The security forces said 15,018 pilgrims without Haj permits were returned to where they came from by police checkpoints.

Brig. Sami Al-Shwaih, spokesman of the security forces, said that as many as 466,566 illegal expatriates in Makkah were not allowed to go for Haj while 209,741 cars without licenses to enter the holy sites were also returned.

He said that as many as 5,909 digital cameras were monitoring the management of the masses.