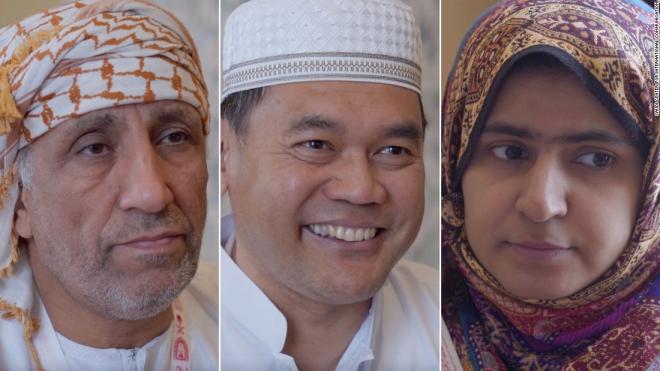 (CNN)When 31-year-old Maryam Gul laid eyes on the Kaaba this week, it was a moment of complete peace. The cube-shaped structure, and most sacred shrine of Islam, felt a world away from the Linwood mosque at Christchurch, New Zealand where her mother, father and brother were fatally gunned down earlier this year.

"I thought I am looking at a symbol, a symbol of peace. A symbol of God. He's here," Gul told CNN.

Gul is one of 200 people who arrived in Mecca, Saudi Arabia from Christchurch this week to perform t he annual Hajj pilgrimage , which began on Friday. They are survivors of the March 2019 terror attacks at two Christchurch mosques as well as the relatives of those who were slain in the shootings.

Fifty-one people were killed in the attack by a white nationalist gunman during Friday prayers.

Saudi Arabia's King Salman extended the invitation to the group for the all-expenses-paid pilgrimage in July. CNN's interviews with Christchurch pilgrims in Mecca were facilitated by the kingdom's Center of International Communications.

In a statement published by the official Saudi news agency, Minister for Islamic Affairs Abdullatif bin Abdulaziz Al-Sheikh said the state-funded trip was part of the kingdom's efforts to "confront and defeat terrorism and terrorists." Christchurch survivors and victims' relatives say the pilgrimage has been a means to healing from the violence that changed their lives.

Mohammed was shot in the leg three times at the al-Noor mosque in Christchurch. Because of his injury, he must perform the obligatory seven circles of the Kaaba on crutches or in a wheelchair.

Performing the Hajj is considered compulsory for every Muslim who is physically and financially able to make the journey. However, the five-day pilgrimage -- held every year in the days leading to the Muslim holiday of Eid al-Adha -- can be taxing.

For Muslim worshippers in New Zealand, some 9,500 miles from Mecca, the journey is especially difficult. "It's a trip of a lifetime. It's a dream trip. I can't believe I'm here," said Rashid Omar, 51, a Singapore-born electrician from Christchurch.

"We were caught by surprise because we weren't quite ready," Omar said, recalling the moment his family received the invitation to go to Hajj. "(We thought) 'who's going to look after the children, who's going to go?'"

"I'm looking for a peace of mind, for my own spiritual way," said Omar. "I just want to make special supplications for my son, Tariq, and also my family."

His voice falters as he talks about his son's passing. "He was in the masjid (mosque) when he was shot," said Omar. "We didn't find out until a few days later ... I'm really hoping that this will heal myself and my whole family."

She had planned to go to Hajj with her parents, but the Christchurch shooter dealt a fatal blow to their plans.

Gul has been in Mecca since Monday, immersed in worship and reflection about her fallen relatives. She said she feels their presence in the holy sites with her.

"They are with me all the time. I talk to them. I tell them 'oh mother, I'm here in Mecca -- I have been invited,'" said Gul. "I think to myself that maybe they are also here, doing their prayers. Maybe their souls are here."

In a message to King Salman, she added: "I'm very thankful to the Saudi government that they brought us here to experience this journey. I do pray that they do more good and bring more broken hearted people here."

Apart from the meditations on healing, forgiveness and the afterlife, relatives of the Christchurch victims said they also pray for others, strangers around the world, to be spared the pain of terrorism.

"My main goal is -- apart from fulfilling the fifth pillar of Islam (the Hajj) -- is the supplication, the duaa' that this act of violence and act of terrorism will never happen again anywhere to anybody," said Omar.

"It's very painful as a family of the deceased, to have a loved one gone. It doesn't matter what race or religion we are. We suffer the same."