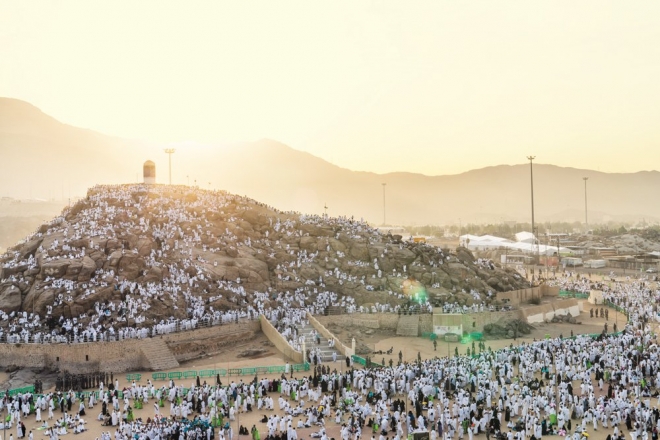 RIYADH: As a child of Makkah and a regular visitor to the Kaaba since before he was 10 years old, no one knows the grounds of the Grand Mosque better than Zakaria Murshid. He told Arab News he has performed Hajj “maybe 40 times,” but probably more.

Growing up in the city, Murshid volunteered with various organizations over the course of many Hajj pilgrimages.

He has been a volunteer paramedic, a mutawwif (someone who leads pilgrims in the traditional rites and prayers of Hajj and Umrah) and a guide. But 86-year-old Murshid is special in one more very personal way for me: He is my grandfather.

When I was growing up, he would regale me with his tales of Hajj. I recall playing with one of his old books that would pop up to become a mini replica of the Kaaba, which my siblings and I would circumambulate while repeating the prayers he taught us.

He would tell us stories of incidents you could only really experience in Makkah: Two pilgrims who speak different languages having an entire conversation without any words, or seeing pilgrims from all over the world come together to help, support and protect each other.

It is the most noble thing a human can do, he told me, and I grew to believe it as the years went by.

Murshid was keen to perform Hajj yearly, and made sure each of his children went on their first pilgrimage as soon as they were old enough. Even when he moved to Riyadh in the 1960s, he took his family to Hajj almost every year.

Over the years, Murshid’s ability to perform the pilgrimage yearly has dwindled for a number of reasons.

• Hajj takes about 3-5 days and occurs on the 8-12th of Dhu Al-Hijjah month of the Islamic calendar.

• Pilgrims stay at Mount Arafat, then move to Muzdalifah and Mina, where they perform the stoning ritual at the Jamarat.

• Hajj is the fifth of the Five Pillars of Islam.

• For every Muslim, performing Hajj at least once in their lifetime is obligatory if they are physically fit and financially able.

Aside from factors such as age-related health problems, he said it has become much harder for people to perform Hajj on the spur of the moment.

“It used to be that you could just drive to Makkah and perform Hajj on your own. The regulations have gotten much stricter as of late,” he said.

Nowadays you cannot perform Hajj without a permit, and unregistered pilgrims face hefty fines and risk deportation or jail.

Also, the Saudi government will not issue Hajj visas to individuals who have performed the pilgrimage in the last five years.

But Murshid does think there are benefits to this. “Restricting the number of pilgrims each year gives more people a chance to come for the first time,” he said.

“I consider myself lucky to have been able to perform Hajj so many times. That was a long time ago, however. Things are different now, and maybe for the better,” he added.

“When I married, my wife, children and I would go with family. We’d get our trusty pickup truck, pile the tents and equipment in the back, and drive from Riyadh to Makkah.

“We’d perform the rites often unaided, and things were definitely harder back then. Transportation, for example. If you didn’t have a car, you had to walk everywhere.”

Zakaria Murshid, now aged 86, has worked as a volunteer paramedic, a guide and a mutawwif (someone who leads pilgrims in the traditional rites and prayers of Hajj and Umrah). (Supplied photos)

During his most recent Hajj, he was stuck between Arafat and Mina and had to ask a stranger with an all-terrain vehicle to take him back to Mina as he could not make the journey on foot due to his age.

“That, for me, is the spirit of Hajj — that kindness and willingness to go out of one’s way for a stranger,” Murshid said.

He applauded the government’s efforts to make the pilgrimage easier, with new introductions such as the train system, the organized efforts of licensed Hajj campaigns, and the renovations of the mosque grounds and other facilities.

But Murshid is also nostalgic about the old struggles of Hajj. In his view, people are missing the point of the experience when they seek ultra-luxurious facilities and lodgings.

“The point of the exercise is to struggle, to mingle with everyone out there until everyone is the same,” he said.

“No one should be above anyone. We need to work harder to unify the experience for everyone.”

My grandfather has performed Hajj more times than anyone I know, but he said he would do it again in a heartbeat if he could.

“Hajj is like nothing else in the world,” he said. “The closeness you feel to Allah, the knowledge that all of your efforts and exertions are pleasing Him, and knowing that at the end of the ordeal all your sins will be cleansed and you’ll be as you were the day you were born — those are my favorite things about Hajj.”

Murshid offered advice to the all-female Arab News team performing the pilgrimage this year. “Stick together, take care of each other but, above all, immerse yourselves in the experience,” he said.

“Hajj is the most beautiful thing you’ll ever take part in. And know that you’re making us all proud.”