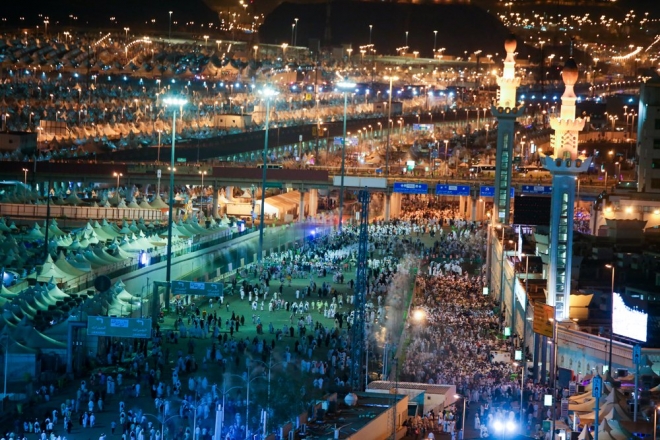 One of the biggest showpieces of Hajj infrastructure is Jamarat Al-Aqaba, constructed at a cost exceeding SR 4.2 billion ($1.12 billion) and capable of handling a flow of 300,000 pilgrims per hour.

The 950-meter long and 80-meter wide structure is designed to support 12 floors and accommodate five million pilgrims in the future if needed. It is at this site that pilgrims throw seven pebbles at a wall in a ritual that symbolizes the stoning of the devil.

According to Islamic tradition, Prophet Ibrahim was on his way to sacrifice his son Ishmael at Allah’s request when he was tempted by the devil on three occasions. Each time the prophet threw stones at the devil to drive him away.

RITUAL FACTS Jamarat refers to three stone pillars in the city of Mina. The pillars are Al-Jamarah Al-Sughra; Al-Jamarah Al-Wusta; and Al-Jamarah Al-Kubra or Jamarat Al-Aqaba. According to Islamic tradition, each time the devil tried to divert Prophet Ibrahim’s attention while en route to make a sacrifice, the Prophet would throw seven stones at the devil. The stoning is carried out from the 10th to the 13th day of the Islamic month of Dul Hijjah. On the 10th day of Dul Hijjah, Eid, only Jamarat Al-Aqaba is pelted with stones. During the subsequent days, all three are to be pelted with stones. The stone throwing must be completed within the allotted timeframe or a penalty will be due.

Fatal stampedes have marred this ritual during Hajj several times in the past. This year the Saudi Ministry of Hajj, in collaboration with other government bodies, has put in place an elaborate plan to prevent the conditions that could lead to a stampede.

To ensure that all goes to plan, crowd-control personnel have been enlisted from the police and Saudi Civil Defense.

“Every year we develop a program for crowd-management and control,” Amro Maddah, advisor to the Minister of Hajj, said.

“Each camp for each country has a number and a specific crowd-management worker. These people are all following the operational plan of the ministry."

Maddah said each crowd-management worker has a specific plan based on the schedule. “The pilgrims will throw their stones and go back to their designated camps," he told Arab News.

"To make sure that the schedule is properly followed, we use crowd-control cameras and smart IDs.”

“Every camp has a worker dedicated to them. That person is responsible for making sure that the pilgrims follow the schedules provided to them.

“If the schedule is not met and the person did not do his job, the office that he works for will end up getting a note from the ministry and then a huge penalty.

“We have more than 8,200 group leaders that are responsible for the movement of pilgrims,” Maddah said. “They are from Saudi Arabia, they are trained for this job and are highly reliable.”

In order to not repeat the previous incidents and to maintain a healthy environment, Maddah said that this year’s crowds will be better controlled.

The Jamarat Bridge is vital for streamlined crowd management. The bridge is constructed around three vast pillars with multiple entrance and exit points at different levels.

The facility includes all the services needed to aid pilgrims, including an underground tunnel that separates vehicles from pedestrians; 11 entrances; 12 exits; a helipad for emergencies; and a sophisticated cooling system.

The Kingdom’s leadership was keen to implement the project to ensure pilgrims’ safety and security, as well as eliminate risks at the stoning area and avoid problems caused by overcrowding.

The area also features underground tunnels for vehicles and evacuation exits through six emergency towers connected to the ground floor, tunnels and airfields.

The design of Jamarat and its elevation both improves movement and increases bridge capacity, helping to reduce the risk of stampedes and overcrowding.

During the 1436 Hajj season, the west square of Jamarat was expanded by about 40,000 square meters from the north to form an exit toward Makkah.

The dimensions shifted, with the length extending to a kilometer and the width exceeding 70 meters.

Streets around the Jamarat have been reorganized in line with the expansion project, including Hajj Street, Prince Majed Street and the Grand Mosque Street.

The expansion has also meant that vital roads have improved connections, so there is a smoother flow of pilgrims exiting the facility.

The Jamarat Bridge has undergone a number of development and expansion works since it was established in 1974.

In 1982, the bridge was expanded in width and length from the north. There was a second expansion in 1987, increasing the width to 80 meters and the length to 520 meters.

The boarding ramp was extended to 40 meters in width and 300 meters in length. Five new service bridges were added, as well as signage, lighting and ventilation. Its total area reached 57,600 square meters.

The Jamarat Bridge underwent redevelopment in 1995, and again 10 years later.

Other changes involving creating new emergency exits, installing signage with information and warnings in case of overcrowding, and connecting screens and signage directly to pilgrims’ camps.