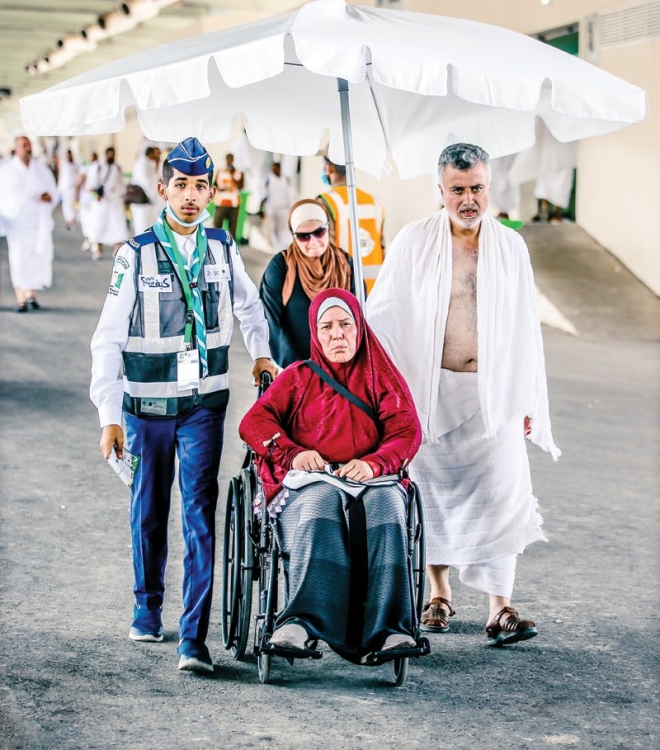 AMMAN: For three years, Dr. Emad Abu Safieh has been filling out online Hajj applications. Every year he fills out two: One for his father Ahmad and his mother Shukrieh, and another for his 71-year old uncle Yousef.

Safieh, 44, a university professor and dean of the business department at the Arab Open University in Amman, told Arab News that he was happy to help with the posting of Hajj request for his older relatives.

“The site is easy to use; after filling out the details, including contacts and a secondary phone number, a confirmation message is sent to both the basic phone number and the alternative one. Hajj digitalization is happening now and it works well.”

Safieh’s hope to accompany his father did not materialize this year, as only his uncle’s application was accepted. “But at least my dad will go as his companion, and he will also be accompanied by my mother,” Safieh said.

Hajj application digitalization covers both Saudi Arabia’s internal applications and the massive number of visa applications under the title “electronic visa path.” But while the electronic visa path is mostly connected to those wishing to travel by air, companies in countries like Jordan, where the majority of pilgrims prefer the land route, say that the digitization of the Hajj has helped them a lot.

Majdi Batoush, the lead technology officer at Jordan’s Islamic Waqf Department, told Arab News that the electronic path for the Hajj set up by the Saudi Ministry of Hajj has made life much easier for many. “In one site we have all the details and we no longer have to file through loads of paperwork as we used to do in the past.”

Batoush says that nearly 90 percent of all pilgrims today get a visa using the electronic path created by the Saudi authorities. “Once online, the data can be shared to the benefit of all relevant bodies each as is necessary for their work,” he said.

In one site we have all the details and we no longer have to file through loads of paperwork as we used to do in the past.

Ali Daebess has been working at the Teeba Al-Bawadi Hajj and Umrah Tourist Co. for 19 years. Speaking to Arab News, Daebess explained that the digitalization of the Hajj has made life much easier also for tour companies. “We used to photograph and scan passports five or six times, and we had a ton of paperwork. Now everything is online and much easier.”

Daebess concedes that most pilgrims are older and are not computer or internet literate.

“They come to our office and we upload the information for them, we do it for free and it takes a few minutes to post.” The IT specialist, whose company’s Facebook page boasts over 27,000 followers, says that social media has been helpful. “We get a lot of feedback on social media mostly from relatives of pilgrims.”

Although the digital process appears smooth these days, Hajj companies and government officials admit that things were not easy at first. “It was hard at first to adjust and the site was difficult to navigate,” Majdi told Arab News, “but now things are much easier and we are able to process many more applications in a shorter period of time.”