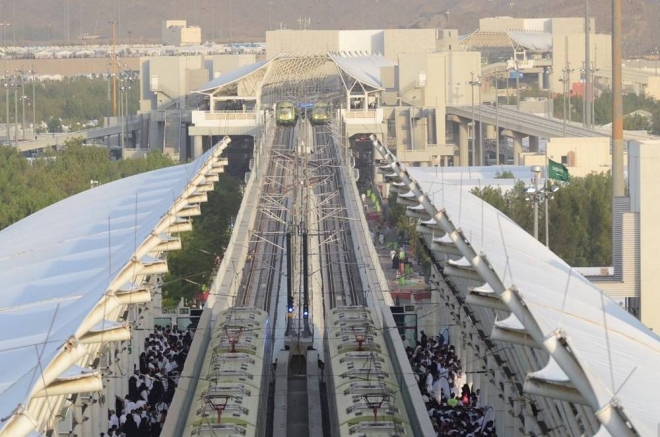 This covered several stages, including the Ascent, Nafrah and Stoning of Jamarat Al-Aqabah during this year’s Haj season, as announced by the Saudi Railways Company (SAR), operator of Al Mashaaer Al Mugaddassah Metro, in coordination with the Makkah Region Development Authority (MRDA).

The Supervisor of Al Mashaaer Al Mugaddassah Metro Muhammad Fida said that the first stage of the metro trips began at 4.00 a.m. on the 7th of Dhul Hijjah. The metro stopped at all the stations, ending service at 6.00 p.m. During this period, over 16,000 pilgrims were transported between the nine stations.

Fida added that in the second stage 340,035 pilgrims were transported from Mina to Arafat to spend the day with the rest of the pilgrims on Arafat plain supplicating to Allah Almighty and glorifying Him. This stage began at 8.00 p.m. on Tarwiyah Day (8th of Dhul Hijjah) and ended at 11.00 a.m. on Arafat Day.

The third stage of Al Mashaaer Metro started at 7.00 p.m. on Arafat Day transporting pilgrims during the Nafrah to Muzdalifah, successfully transporting some 353,000 pilgrims in six-and-a-half hours.

Kaaki said that crowd management plans this year have contributed effectively to the success of the movement of pilgrims to the Ascent and Nafrah and to the Jamarat Complex. In this connection, the Authority provided its workers with training courses in crowd management before the onset of the Haj season. This enabled the MRDA and the metro project to achieve the aspired goals. – SPA