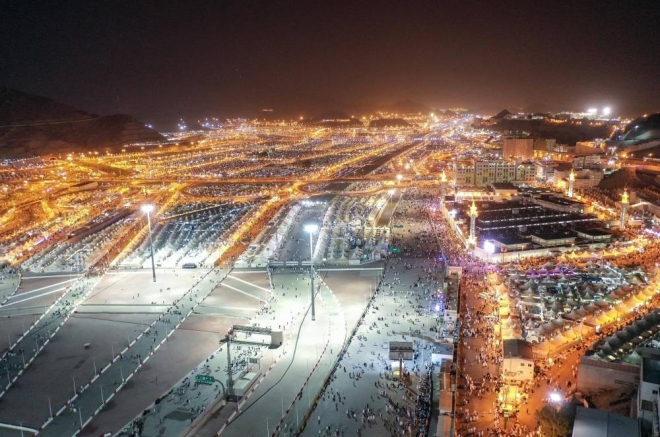 MAKKAH — The Interior Ministry has described the Haj as a resounding success with pilgrims moving smoothly between Makkah and the holy sites.

The ministry's spokesman, Maj.Gen. Mansour Al-Turki, said the security arrangement for the pilgrims was perfect and that there were no reports of untoward incidents as they descended from Arafat, to Muzdalifa and went back again to Mina where they would stay for a day or two.

The spokesman said there were no cases of stampede at the Jamrat.

The pilgrims on Monday began the first day of Tashriq. They continued to throw stones at the Satan, slaughter their sacrificial animals and do Tawaf Al-Ifadah at the Grand Mosque.

"The movement of the pilgrims went by in complete harmony according to the security plan which included monitoring their movements with digital cameras and from air by aircraft," he said.

The spokesman of the general security in Haj, Brig. Sami Al-Shuwairikh, said as many as 288 fake Haj offices were discovered and the owners will be handed over to the Attorney General before being sent to courts.

He said 40,352 people without Haj permits were sent back and 244,485 cars were also returned from the checkpoints because they did not have licenses to enter into the holy sites.

The spokesman said a total of 7,027 expatriates were found to have violated the Haj rules and regulations and their fingerprints were taken. He added that 130 people, who were found to have provided illegal pilgrims with transport, would be penalized as per the rules.

He said 533,006 people in their Ihrams were sent back from Makkah and prevented from entering the holy sites to do the Haj.

Spokesman of the Presidency of the State Security Maj.Gen. Bassam Attiyah said 50 prisoners in the intelligence prisons were enabled to do the Haj with their families.

"The prisoners have the right to do the Haj under the Shariah rules and regulations," he added.

Hatim Qadhi, spokesman of the Ministry of Hajj and Umrah said as many as 15,000 pilgrims who lost their way, including 3,700 in Mina, were guided to their places of accommodation in the city of tents.

He said the majority of the pilgrims who lost their way were in Arafat, including four children. He explained that the pilgrims left their tents to go to the Jabal Al-Rahma (mountain of mercy) but were not be able to go back to their respective tents.

Qadhi said the shuttle buses have transported more than 800,000 pilgrims.

Spokesman of the Civil Defense Lieut.Col. Mohammed Al-Hammadi said there were no deaths or injuries resulting from the rains in Makkah.

He said some pilgrims were rescued by aircraft. "These were, however, extremely few cases," he added.

Dr. Mohammed Al-Abdulaal, spokesman of the Health Ministry, said there were no epidemic cases so far among the pilgrims.

"During the Haj season we provided curative services to 368,410 pilgrims including 29 open-heart surgeries and 1,949 kidney dialysis," he said.

Abdulaal said as many as 2,932 pilgrims were confined to hospitals.