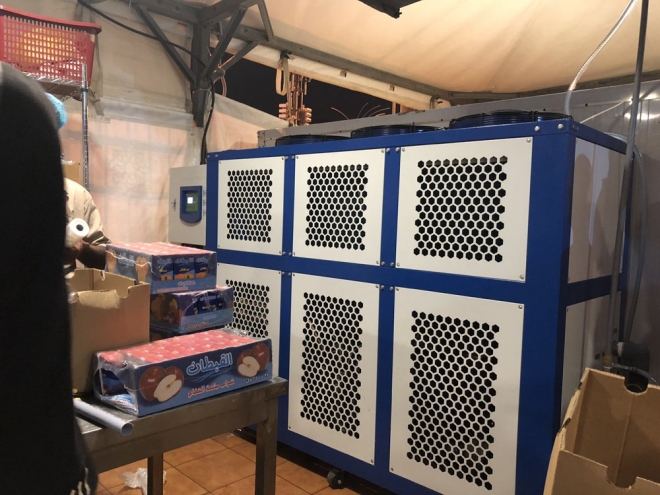 MINA: The Mutawwify Hujjaj South Asia Establishment, along with Jsour Al Garbia trading, introduced a water-cooling system to one of their camps in Mina this year.

Cold drinking water is one of the most sought-after commodities in many of Mina’s camps, and a lot of money and effort is wasted trying to transport and keep ice stocks in supply in the camps, according to spokesman Waheeb Ismail Badr.

“We are doing a trial run of this machine that we brought in from China,” he told Arab News, adding it was the first of its kind to be introduced in Mina. “This machine ensures that we no longer have to deal with the issues that come along with trying to keep ice stocked in the camps. As such, the backup stock of ice we brought in on August 8 has barely been touched.”

The cooling system was the result of two years of study and research. The water, which is supplied by the government, goes through the device’s filtration system and emerges cold and refreshing, available to pilgrims at just the turn of a knob.

Engineer Nader Abduljawwad explained how the system worked. “The device is powered by electricity, and we can control the number of compressors that are on at any given time to control how cold the water is, whether we want it icy cold or just cool depends on how many are running,” he told Arab News. “The device is connected to pipes that ensure that the water is distributed all over the camp.”

The system delivers between five and eight thousand liters of water an hour to all of the distribution areas of the camp and pilgrims can collect the water from any of the designated campsite areas.

Both Badr and Abduljawwad were delighted to say they had faced no problems with the system so far, and hoped the successful trial run would encourage other camps to look for similar solutions to deal with ice-related issues. “The machine is effective, doesn’t take up that big of a space, and uses about as much electricity as a regular air conditioner,” said Abduljawwad.