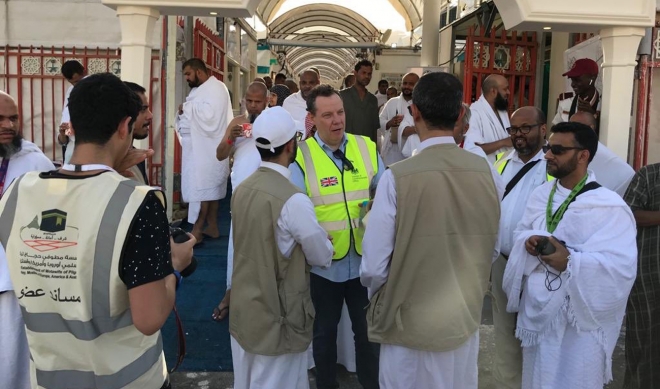 JEDDAH: The head of a British parliamentary group praised Saudi authorities for their efforts in ensuring another successful Hajj season. The Kingdom welcomed about 26,000 British pilgrims this year, many of them first-timers. In addition, more than 100,000 pilgrims traveled from the UK to perform Umrah.

MP Yasmin Qureshi, who chairs the All-Party Parliamentary Group on Hajj and Umrah, was among the British Hajj pilgrims.

“I would like to thank the Saudi government for their logistics and preparations for Hajj, which has allowed British pilgrims to perform the pilgrimage with significant ease,” she said.

“At the Hajj Symposium, I had the opportunity to meet the Deputy Minister for Hajj and Umrah, Dr. Abdul Fattah Mashat, and Dr. Abdul Aziz Wazzan (an undersecretary at the ministry), who shared with us the Kingdom’s Vision 2030 reform plans. They are hoping to increase the number of pilgrims and enhance their experience. The number of Britons who attended Hajj is a promising sign of their future success.

“We look forward to developing close cooperation between Saudi Arabia and the UK.”

British tour operators and pilgrims reported great improvements at Hajj this year, including an immigration process lasting less than five minutes and a journey to Makkah that took only a few hours.

“I was proud to receive the first group of Hajj pilgrims (from Britain) on arrival at Jeddah airport last month,” said British Consul-General Seif Usher. “During the course of Hajj, I have had the privilege of meeting pilgrims from across the United Kingdom. Their commitment to fulfilling this most important of religious undertakings in Islam, and especially during the high temperatures of August, has been an inspiration.”

Rashid Mogradia, CEO of the Council of British Hajjis, also commended King Salman and the Saudi government for developing a range of services that ease and improve the Hajj experience.

“We are witnessing a transformation in the delivery of services for Hajj, and we are adapting by working with licensed Hajj organizers and local Saudi agencies to deliver support for British pilgrims,” he said.

“Our dedicated Hajj Team has been moving with the tour groups and pilgrims throughout Hajj and supporting them as required, giving them reassurance during this enduring journey of faith.”