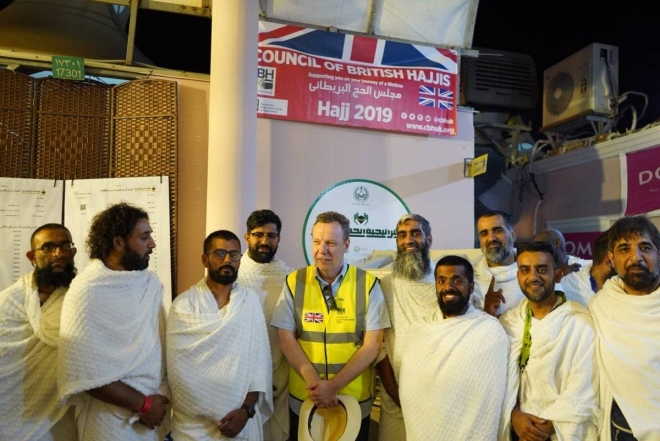 JEDDAH — Over the past few weeks, Saudi Arabia has welcomed an estimated 26,000 British pilgrims who have come to the Kingdom to perform Haj, many of them for the first time. This is in addition to the more than 100,000 pilgrims visiting from the UK to perform Umrah.

Yasmin Qureshi MP, Chair of the All-Party Parliamentary Group on Haj and Umrah, said: “I would like to thank the Saudi government for their logistics and preparations for Haj which has allowed British pilgrims to perform the pilgrimage with significant ease.

“At the Haj Symposium held at the Hilton Convention Makkah, I had the opportunity to meet with the Deputy Minister for Haj and Umrah Dr. Abdul Fattah Mashat and Dr. Abdul Aziz Wazzan, undersecretary of the Ministry of Haj and Umrah for Umrah Affairs, who shared with us the Kingdom’s Vision 2030 plans which aim to increase pilgrim numbers and enhance the Haj and Umrah experience. The number of UK pilgrims is promising and aligns with this.

“We look forward to developing close cooperation between the Kingdom of Saudi Arabia and the United Kingdom”.

UK tour operators and pilgrims alike cited great improvements at this years Haj from the point of arrival at immigration taking less than five minutes to processing pilgrims arriving in Makkah in just a few hours. The new high-speed Haramain Rail service has been well received and some UK groups have taken advantage of this service for the first time during Haj which will help reduce travel time between Makkah and Madinah to just three hours in a more comfortable and relaxing ride as compared to around six hours if traveling by coach.

British Consul General Seif Usher said: “I was proud to receive the first group of Haj pilgrims to arrive at Jeddah airport last month, direct from Manchester. And during the course of Haj itself, I had the privilege of meeting, together with my consular team, with pilgrims from across the United Kingdom. Their commitment to fulfilling this most important of religious undertakings in Islam, and especially during the high temperatures of August, has been an inspiration.

“We also continue to see the huge investment in infrastructure and services by the Saudi authorities to ease the journey for pilgrims. This is hugely appreciated by all.”

Rashid Mogradia, CEO of the Council of British Hajis and Secretariat to the cross-party Haj and Umrah group, commended the efforts by the Custodian of the Two Holy Mosques and the Saudi government in delivering services for pilgrims to ease their Haj experience. “We are witnessing a transformation in the delivery of services for Haj and we are adapting by working with licensed Haj organizers and local Saudi agencies to deliver support for British pilgrims,” he said.

He added: “Our dedicated Haj team has been moving with the tour groups and pilgrims throughout Haj and supporting them as required. This is reassurance during this enduring journey of faith. Haj Mabroor to everyone completing Haj”.