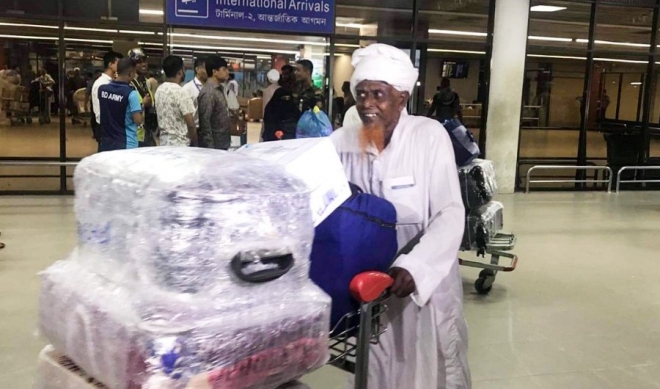 DHAKA: Bangladeshi pilgrims who returned from the Kingdom late on Saturday commended Saudi Arabia for the management and facilities extended during Hajj.

The first group of pilgrims landed at the Hazrat Shahjalal International Airport in Dhaka on Saturday with nearly 127,000 Bangladeshis performing Hajj this year.

Half of the pilgrims enjoyed the pre-immigration facilities at Dhaka airport for the first time under the Saudi government’s Makkah Route initiative.

Bangladeshi Hajj officials at Dhaka said that from next year all Bangladeshi pilgrims will enjoy the pre-immigration facilities at Dhaka, which will reduce the waiting time of pilgrims at Saudi airports.

Almost all Bangladeshi pilgrims have lauded the new Hajj management initiatives introduced by the Saudi authorities.

“After reaching Saudi Arabia, I installed the Smart Hajj app on my smartphone. I found it very useful to identify the exact direction of Qiblah (Kaaba) during my visit to the holy places,” Masuda Begum, a Bangladeshi pilgrim told Arab News.

“Using the Manasikana app, I located my companions and was reunited with them. The idea of introducing this smart technology during Hajj is really amazing,” she said.

Another Bangladeshi pilgrim, Abul Hashem, suggested that the Smart Hajj app would be more effective if the Saudi management could incorporate the Bangla language.

“Although we understand Hindi and Urdu during conversations, most of us cannot read Hindi and Urdu text. And many of the Bangladeshi pilgrims do not have much knowledge in English, which made us helpless in receiving services from the app,” Hashem said. However, Hashem found the multilingual emergency services very effective.

• Pilgrims from Bangladesh praised the pre-immigration facilities introduced by the Saudi government.

“One of our fellows suddenly fainted due to the scorching weather and he was immediately hospitalized with the support of these volunteers,” Hashem told Arab News.

“After landing at Saudi Arabia airport, I was at a loss about what do since hundreds of pilgrims from different countries were moving together. At this moment, I approached the multilingual speakers at the Hajj terminal and managed my next directions,” she said.

However, she suggested developing overall toilet management in Mina-Arafat-Muzdalifah during the Hajj ritual days.

“Sometimes I did not get enough water in the washrooms in all three places. With a little effort from the management it would have been even better,” she said.

She also suggested increasing the number of indicator guidelines with multilingual approaches, including Bangla, at different places of the Grand Mosque in Makkah.

According to the Hajj office in Dhaka, 81 Bangladeshi pilgrims died in Saudi Arabia during the Hajj season. Last year, the number was about 150.