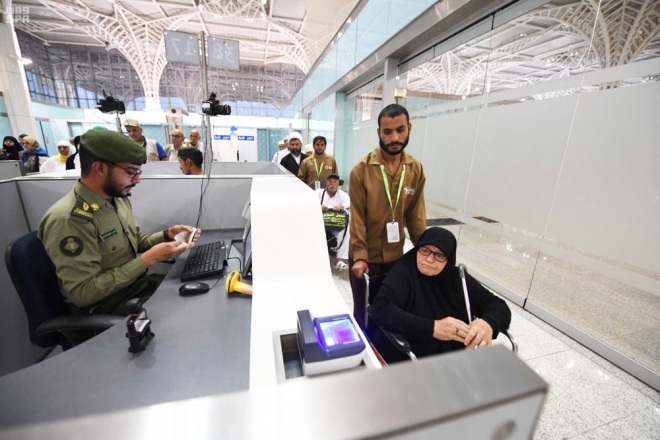 MADINAH: Flights departing from Prince Mohammad bin Abdul Aziz International Airport in Madinah continue to transport pilgrims to their countries after performing Hajj and visiting the city to pray in the Prophet’s Mosque.

The airport is witnessing continuous efforts to receive pilgrims, work on their travel procedures and transport their luggage in a timely manner, in collaboration with all parties involved in Hajj.

Three lounges have been set up at the airport to receive departing pilgrims, with more than 3,000 flights until Sept. 15.

Hajj halls and international lounges were prepared to ensure a smooth flow at the airport. There are also 104 desks for completing travel procedures, 60 for passport procedures, 24 gates directly connected to aircraft via bridges, and nine gates to transport passengers between planes and lounges by bus.

An external area was prepared to receive pilgrims’ luggage in advance of their departure, as were several plazas extending over 10,000 square meters and equipped with all the necessary amenities. There is also a parking area that can accommodate 250 buses.

The commander of Hajj security forces, Brig. Gen. Fawaz bin Qalit Al-Faqir, said all necessary actions have been taken for the completion of departure procedures, the duration of which does not exceed 30 seconds per pilgrim.