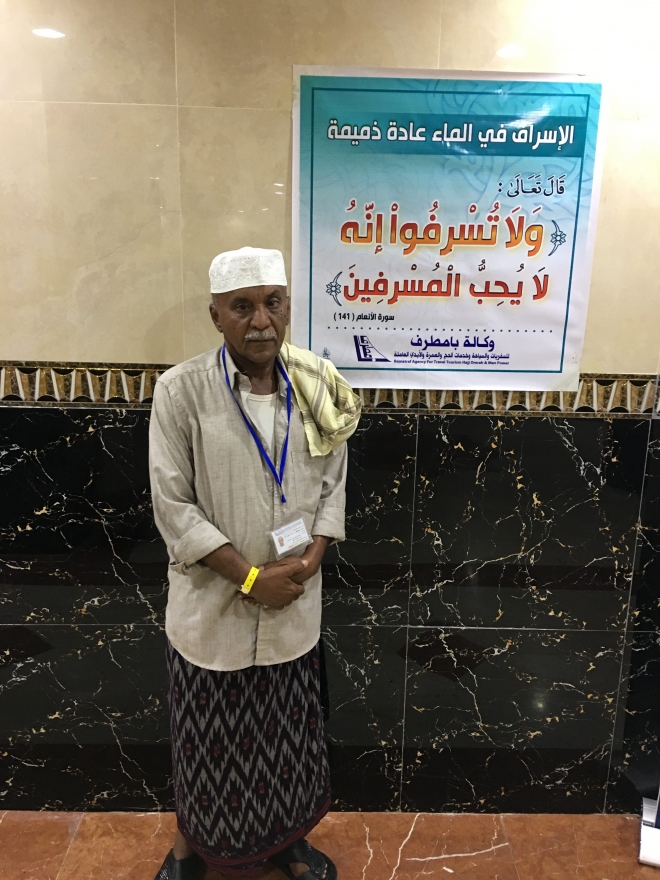 Yemeni Hajj pilgrims began trickling back home in recent days from Saudi Arabia, after undertaking the trip of a lifetime: the journey to visit Islam’s holiest sites .

Roughly 25,000 Yemenis performed the annual pilgrimage to Mecca and Medina this year according to government officials, meaning the country sent the maximum alloted number of pilgrims – one thousand for every million Muslim citizens.

Traveling from the Arab world’s poorest country, these pilgrims spent $50 million this year on the Hajj, or an average of $2,000 per person, according to Yemen’s minister of endowments and guidance.

Their fulfillment of the fifth pillar of Islam comes as the war between Yemen’s Saudi-backed government and Houthi rebels, which has provoked what the United Nations calls the world’s worst humanitarian crisis, drags through its fourth year.

“Yemenis are religious by nature and seek to perform the fifth pillar of Islam at any cost,” the minister, Ahmad Atiya, told Asia Times in Mecca.

For the majority of Yemen’s 25 million people who live on less than a dollar a day, performing the Hajj is pie in the sky.

Those who made it to Mecca told Asia Times it took them years to collect the bare minimum – at least 8,100 Saudi riyals ($2,160) – needed for accommodation and the most basic travel mode: going by bus.

Older Yemenis, desperate to perform the sacred rite, say they sold off their assets to raise the money quickly.

Speaking to Asia Times inside a towering building that hosts Yemeni pilgrims in Mecca’s Mansour street,as he was getting ready to return home, Saleh Khames Jaber, 69, a retired public servant said that he, his wife and a son had been collecting Hajj money for two years.

“Every time I got some money, I changed it into Saudi riyals and added it to our Hajj savings, regardless of the fluctuation of the currency,” Jaber said.

But even those savings were not enough to send them to Mecca, and so he implored his wife to sell her gold.

“We forgot our worries when we reached the holy sites here. This is a pillar of Islam and we performed it, thank God,” he said with tears in his eyes.

Saeed Bashateh, 58, went to a more extreme measure to reach Mecca with his wife. He sold the home he inherited from his forefathers to pay for the trip.

“We were forced into selling our old house as I realized I can wait for ages collecting money for Hajj,” he said.

Yemeni Hajj agencies say many poor Yemenis sell valuable assets like lands, houses, and gold to make the costly journey, even though they know they will return home empty-handed.

For the few Yemenis able to secure the funds to perform Hajj, the past years of war have made the journey even harder as shifting battle fronts and fracturing alliances make movement within the country extremely difficult.

Pilgrims said the hardest part of the trip is between home and the Yemeni border with Saudi Arabia, as they are obligated to cross many checkpoints belonging to the various factions.

Yemen is currently divided between Houthis, who hold sway over the north, and various militias loyal to the internationally-recognized government.

Abdu, a Yemeni pilgrim from the Houthi-controlled capital, Sanaa, says he embarked on a backbreaking journey from his house in Sanaa to the southern city of Aden a few days before his flight to Saudi Arabia, knowing there would be many checkpoints and challenges.

“I had to drive on a rough road in Taiz to avoid contested areas,” Abdu told Asia Times in Mecca. He gave only his first name due to fear of reprisal when he returned home. He said it was a relief to stay in a country that’s at peace and wished he could extend his stay.

Saudi Arabia for years has imposed a land, sea and air embargo on Yemen to prevent the Houthis from bringing in arms from their ally Iran.

Major airports in the capital and other areas have been shut down, due to either the embargo or the war, and only a few planes regularly depart from the central city of Seiyun and the southern city of Aden to Saudi Arabia – an even more elusive mode of transportation for most Yemenis.

Minister Atiya told Asia Times most pilgrims cross into the kingdom through the Wadea land crossing that links the kingdom with eastern Yemen. The minister said this year’s Hajj was less difficult than in recent years, as Saudi Arabia increased the number of check-in counters and dozens of volunteers were deployed on the Yemeni side of the border to provide the pilgrims with shelter, drinking water and food.

“The biggest role in facilitating the trip of the pilgrims comes from our brothers in Saudis Arabia,” Atiya said.

During Hajj, pilgrims are advised to shun politics and to spend time engaging in worship.

This year, as the Yemeni pilgrims were settling down in Mount Arafat for the most important pillar of Hajj, fierce fighting broke out in Yemen’s Aden between government forces and separatists.

The developments reverberated in the holy places, and Yemeni pilgrims said they could not resist their urges to get updates on the situation in Aden.

Many turned to their mobiles to read the news and contact friends.

Another Yemeni had an opposite view, telling Asia Times, “The situation is worrying and might cause more problems.”

The new hajji — as those who complete the Hajj are known – said he was worried over the prospect of the country fragmenting in two.