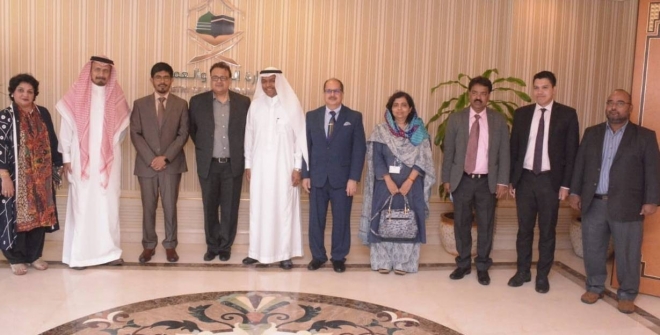 JEDDAH — A government of India delegation has congratulated the government of Saudi Arabia on the successful and smooth completion of Haj operations of 2019. Leader of the Indian delegation Sailesh, secretary of Ministry of Minority Affairs (MoMA), conveyed government of India’s appreciation for the excellent Haj arrangements made by the Kingdom. He also thanked the Saudi government for increasing India’s Haj quota to 200,000 as well as extending full cooperation to Indian officials involved in the Haj operation.

The delegation, which also included Nigar Fatima Husain, joint secretary of MoMA, and Md. Nadeem, undersecretary of MoMA, arrived in the Kingdom on Aug. 31 on a four-day visit that concluded on Tuesday, to review India’s Haj operations and discuss ways of further improving arrangements for the Haj of 2020.

The officials of the ministry and the South Asian Moassasah expressed their appreciation for the various arrangements made by the Indian Haj Mission for Indian pilgrims, especially pre-tagging of baggage, which drastically reduced waiting time for pilgrims at airport. They also appreciated medical facilities and accommodation arrangements made available for Indian pilgrims. The two sides discussed several other topics of mutual interest such as the Makkah Route Initiative, ways of reducing waiting time for pilgrims at airport during arrival and departure, SIM cards for the pilgrims, Haj-visa process, pilgrims’ accommodation norms, arrangements at holy sites, and flight operations.

Meanwhile, Sailesh chaired an interactive session held at the consulate premises in the presence of Ambassador Sayeed, Consul General Sheikh and other officials for a comprehensive review of the Haj operations. After a detailed PowerPoint presentation by the consul general, feedback was taken from about 30 Indian administrative and medical officers who are on deputation to Saudi Arabia and have been working in the field to provide best possible assistance to Indian pilgrims.

The delegation also visited Indian Haj Pilgrims’ Office-cum-Dispensary at Jeddah Haj Terminal and interacted with Indian pilgrims at the terminal who were returning to India after a successful and hassle-free Haj. It may be recalled that a record number of 200,000 Indian pilgrims performed Haj this year, of which 140,000 pilgrims came through Haj Committee of India while 60,000 came through private operators. About 65 percent of Indian pilgrims have already returned to India and their return would complete with the departure of last flight on Sept. 15.