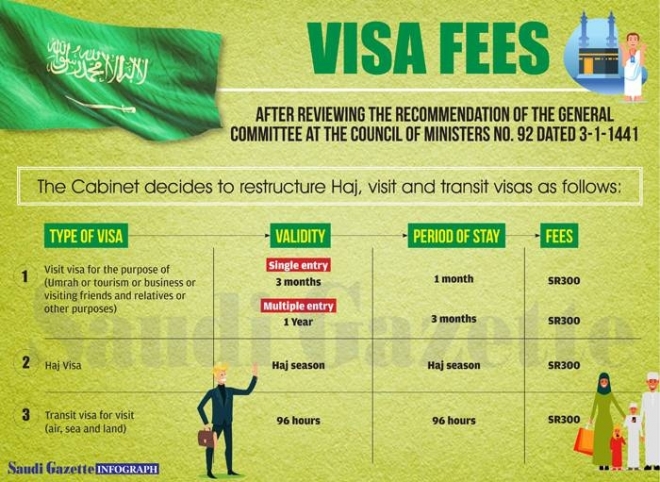 JEDDAH — The Council of Ministers has recently approved restructuring of visa system for Haj and Umrah pilgrims as well as for visitors and transit passengers. This is through unifying the visa fee for issuing visa for each person at a rate of SR300. The Cabinet also canceled fee for repeating Umrah pilgrimage.

This revoked the earlier rule to the effect that an Umrah pilgrim had to pay SR2,000 in case of repeating the pilgrimage during a period of three years. AlArabiya.net published a list of the types and duration of visas included in the recent Cabinet’s decision in this regard.

According to sources working in the visa services, there are some new regulations for Haj and Umrah pilgrims, including selection of travel with an organized trip by licensed companies, as well as complying with health insurance regulations, and insurance of vehicles for visitors and transit passengers.

Minister of Haj and Umrah Mohammed Benten, who is also chairman of the Committee of the Guests’ Service Program, thanked Custodian of the Two Holy Mosques King Salman and Crown Prince Muhammad Bin Salman on the occasion of the issuance of the royal decree in this regard.

In a statement to the Saudi Press Agency, the minister said that the royal decree comes within the framework of the keenness of the wise leadership to facilitate the arrival of Muslims from all over the world to perform the Haj and Umrah rituals.

“This also shows Kingdom’s readiness to receive the increasing number of Haj and Umrah pilgrims through huge infrastructure projects and improving the system of services in Makkah, Madinah and the holy sites.

“The decision boosts efforts to achieve one of the most important goals of the Kingdom’s Vision 2030 to receive 30 million pilgrims by 2030, through a system of great services provided by the Kingdom to the Guests of God.”

On his part, Deputy Minister of Haj and Umrah Dr. Abdul Fattah Mashat said that Saudi Arabia will spare no effort in providing everything that will facilitate the procedures for the arrival of pilgrims to Makkah from all over the world to perform their rituals in ease and comfort.

He pointed out that this decision confirms the keenness of this blessed country since its establishment to serve Islam and Muslims, and overcome all difficulties and harness all the potential for their comfort.


⇐ Previous:
Tourism in Saudi Arabia Yields $9.6B in Two Months
Next: ⇒
Will Jordanians benefit from Saudi Arabia's decision to unify price for Haj, Umrah and visit visas?