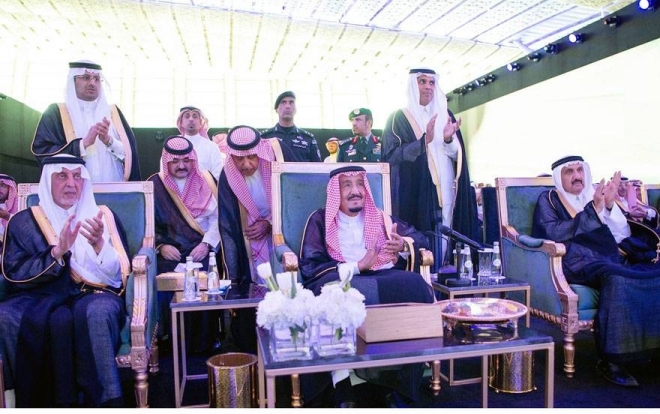 The airport terminal, sprawling over a total area of 810,000 square meters and annual capacity to hold 30 million passengers in the first phase, is one of the largest airports in the Middle East.

After touring the terminal facilities, the King pressed a button to mark its opening. Earlier, upon arrival at the venue, the Monarch was received by Prince Khaled Al-Faisal, emir of Makkah and advisor to Custodian of the Two Holy Mosques, Prince Mishal Bin Majed, governor of Jeddah, Minister of Transport and Chairman of GACA Dr. Nabil Al-Amoudi and GACA President Abdulhadi Al-Mansouri.

The King watched video presentations on the main features of the new airport and another on civil aviation in the Kingdom. The Monarch also witnessed another presentation titled the “New World Front.”

Speaking on the occasion, Minister of Transport Al-Amoudi said the civil aviation sector in the Kingdom has recently achieved qualitative leaps and creative developments.

“This has contributed to 4.6 percent of the gross domestic product (GDP),” he said while citing the report of the International Air Transport Association (IATA).

The number of domestic and international airports in the Kingdom has doubled to 28.

The minister said the new terminal includes 220 counters for airlines, 128 counters for passports, as well as 46 gates, which are connected to 94 movable bridges serving 70 aircraft at the same time in addition to parking for over 21,600 cars.

The ceremony was also attended by several princes, ministers, senior civil and military officials and a number of diplomats accredited to the Kingdom.

The new airport had the soft opening in May 2018 with the landing of a domestic flight from Al-Qurayyat. As of Aug. 9, 2019, the new KAIA (Terminal 1) began operating Saudi Arabian Airlines (Saudia) international flights to Abu Dhabi, Bahrain and Muscat airports, bringing the total destinations to 24. Of these, three are international destinations and 21 are domestic.

More than 26,000 engineers and workers belonging to 100 companies raced against time to complete the first phase of the project, costing SR27 billion.

Located 19 km north of the Jeddah city, the airport is regarded as a world-class iconic and high-tech gateway to the Two Holy Mosques. The KAIA, one of the largest aviation hubs in the world, is a smart, environment-friendly, unique landmark of the Arab and Islamic architecture.

After completion of the 24 domestic destinations, the number of passengers is expected to reach 147,184 while luggage pieces will total 50,746 on board 1,158 weekly flights.

The designs and technologies of the new airport are derived from the Kingdom’s environment in general and the environment of Historical Jeddah, in particular.

There are 80 self-service machines for passenger use. There are 46 gates for international and domestic flights.

The project has a 136-meter-high control tower, which is one of the highest in the world, and a mosque that can accommodate 3,000 worshipers. It has an external courtyard that can be used for worshipers to pray in.

Apart from these, the new airport project has an advanced luggage handling system with conveyor belts totaling 346 km in length. It is linked to the latest multiple-level security systems. The project has a fish aquarium that is 5.13 meters long and 10 meters wide.

The project has a train station that is linked to the Haramain High Speed Rail, and 4-story short period parking lots that can accommodate 8,200 cars. The public parking lots will be equipped with electronic devices that will enable the car owner to locate his car.

There are other parking lots for airport employees and workers, which can accommodate 7,187 cars. The airport project has two fully equipped information centers linked with optic fiber cables and a 36.5 km long road network comprising several tunnels and bridges.

The civil aviation market in the Kingdom has witnessed tremendous growth in air traffic. In this regard, the number of passengers in the Kingdom’s airports in 2018 exceeded 98 million, with a 7.4 percent increase compared to the previous year. Similarly, the number of flights in 2018 increased by 3.4 percent compared to the previous year when it reached 773,000 flights.