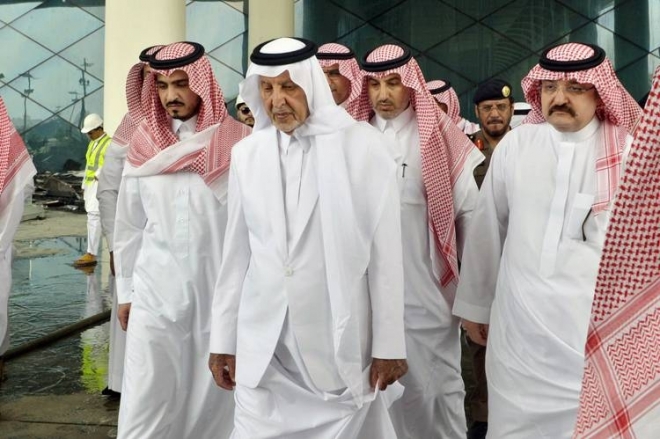 JEDDAH — The Saudi government has ordered the setting up of several committees to probe into the causes of the massive fire that engulfed the Haramain High Speed Rail station in Sulaymaniyah district in Jeddah on Sunday.

The findings of the panels will be presented to the King, Emir of Makkah Khaled Al-Faisal said while inspecting the effects of fire at the station on Monday. Deputy Emir of Makkah Prince Badr Bin Sultan and Jeddah Governor Prince Mishal Bin Majed accompanied him.

“We await the results that will be submitted by the committees formed to find out the causes of the fire. The reports will be submitted to the King for review and the necessary measures to be taken on it,” he said.

The emir said that damage was caused to the second floor and roof of the structure while the first and ground floor were not affected.

Replying to a question about detaining any persons as part of investigation, Prince Khaled said: “We are not able to detain anybody without reason. This is a big issue and there are several factors and there must be investigations about how and why did this happen.”

The emir added, “Any specific percentage of damage caused in the fire cannot be said at the moment.”

Prince Khaled thanked all agencies that participated in putting out the fire. He called on the media to examine facts accurately before publishing any reports, and await results of the investigation.

Meanwhile, the Civil Defense said that the fire has been brought fully under control. Eleven people were injured in the blaze that erupted at 12:35 p.m. on the roof of the fourth floor of the station building with huge palls of smoke seen billowing into the air, darkening the morning skies above the station.

The Civil Defense forces, with the support of helicopters, had to battle for long hours to put out the fire. Several units of the Civil Defense in the Makkah region had swung into action to extinguish the fire and evacuated the people trapped inside the station. The security forces used choppers equipped with water tankers to quell the blaze.