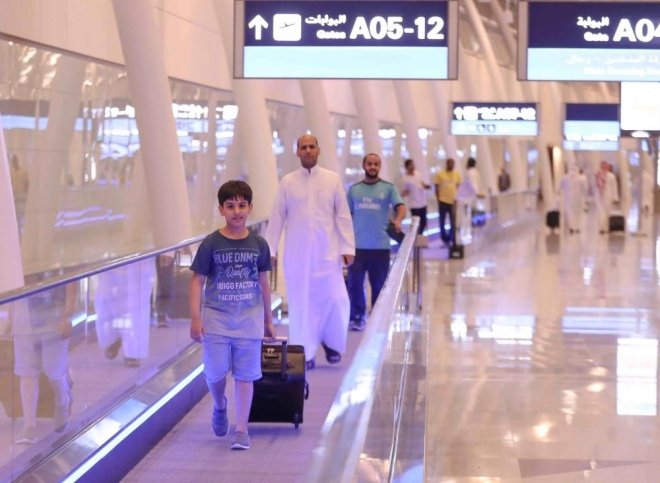 JEDDAH — The new King Abdulaziz International Airport (KAIA) is evolving itself as a global hub for operational flexibility through its connection to a network of international airports.

KAIA has become one of the busiest airports in the Middle East and the Gulf in the region in terms of international and domestic air traffic. In addition, the airport has topped all Saudi airports in passenger traffic in 2018, where the number of passengers reached 35.8 million.

The new King Abdulaziz International Airport, Terminal 1, will achieve the objectives of the General Authority of Civil Aviation (GACA) in the growth of the aviation sector in the region. Furthermore, it is on track to achieve and improve operational flexibility, throughout the year, thus provide a unique experience for passengers.

The new airport is a state-of-the-art economic center and landmark in the Kingdom and the region, integrating with Saudi Arabia’s ambitious development plans, and fulfilling GACA’s own plans to strengthen Jeddah as a global hub.

The airport is the most important airports in Saudi Arabia, where it includes the main center and operations of Saudi Arabian Airlines, and Makkah Air Gate, in which millions of pilgrims and Umrah performers come through it annually. The airport also features the Haj and Umrah Terminal Complex that sits on an area of 230,000 sq. meters. The complex comprises all services from the check-in areas, baggage handling system, health services, public transport and other service facilities.

GACA aims to make the new KAIA a hub airport linking East and West. The total area of Terminal 1 is estimated at 810,000 sq. meters, allowing all air carriers to operate under one roof.

The terminal complex has 220 counters for check-in and 80 counters for self-service passengers. The complex also contains a commercial investment lounge with an area of ​​27,987 sq. meters. There is a three-story hotel for passengers arriving on international transit flights comprising 120 rooms. This is in addition to an advanced system of conveyor-belts at a total length of about 34 km, and can accommodate 7,800 bags for departures and 9,000 for arrival per hour.

The new airport terminal has 46 gates for international and domestic flights, in addition to gateways that can accommodate giant aircraft such as A380. The gates are linked to 94 mobile bridges that can serve 70 aircraft at once. Also it has 28 aircraft parking bays. The airport is also home to one the highest control towers in the world, equipped with the latest air navigation technology.

The new KAIA is characterized by the presence of a control center for the operations of the terminal. The center contains 44 controllers connected to the airport network for all government agencies and operators of the airport. The terminal controls safety and security systems, fire and rescue systems inside the terminal. Furthermore, it contains airport maintenance operations, building and facilities management systems, in addition to systems related to catering, cleaning and fuel, and electronic messages. It also controls competent management systems for aircraft parking and conveyor belts management system, flight systems for delayed aircraft. This in addition to passenger’s traffic management systems, and automated people movers control.

The new airport contains three main load centers providing about 475 MW of electricity, with a capacity of 110,000 TR of chilled water, and 46 pumps of firefighting water. Furthermore, the new airport has two integrated information centers to serve the airport and manage all the intelligent systems inside it, in addition to a mosque that can accommodate about 3732 worshipers.

The airport’s Haj and Umrah Terminal Complex is unique and designed in the form of tents (five tents A-B-J-D-H) covered with fiberglass surfaces mixed with Teflon. Each of the five tent consists of 15 domes, with an area of 465,000 sq. meters. This makes it the fourth largest passenger terminal in the world and consists of two separate locations separated by a 160m wide road. The runway is also designed to serve 10 large aircraft, there is also another runway west of the first runway will be used in the future when the number of pilgrims increases. There are five buildings at each pilgrimage site, each with two gates connected by two bridges leading directly to the aircraft, as well as nearly 120 commercial shops, restaurants, snack shops, a medical center and toilets.