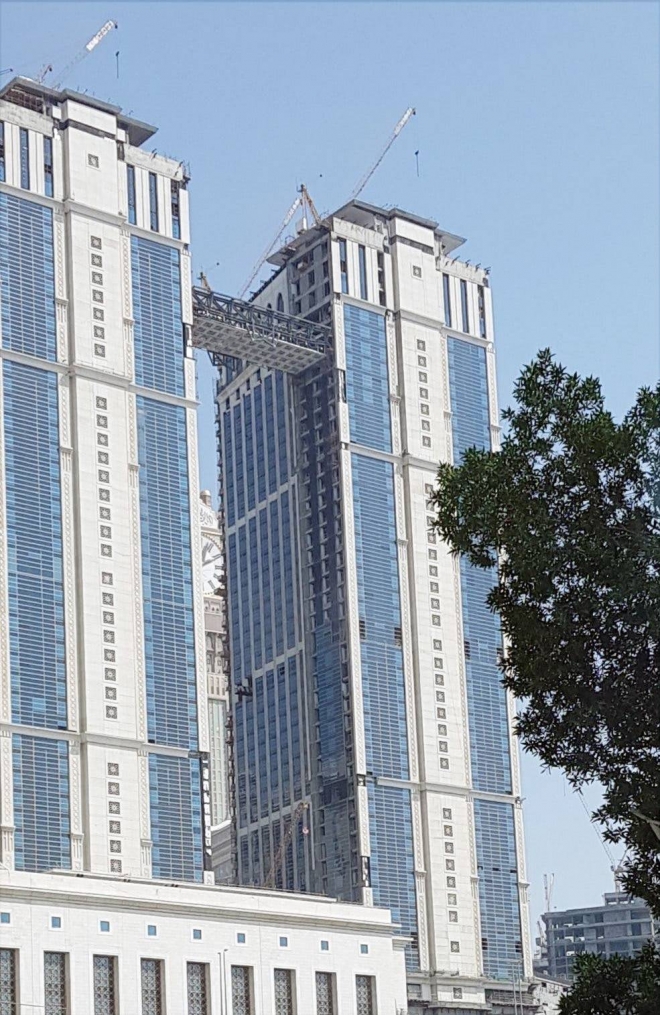 MAKKAH — The construction of a suspended prayer area (musalla), which is the highest in the world, has started here.

With a total area of 400 sq. meters, the suspended ‘musalla’ can accommodate over 200 worshipers.

In the details, the prayer area is located on a bridge linking two towers in the area overlooking King Abdulaziz Road.

It has been designed in such a way that 50 percent is allotted for prayer and the rest for services.

Speaking to Al-Arabiya.net, the consultant who made the designs, the company that constructed the prayer area and Chairman of the Real Estate Committee in Makkah Chamber of Commerce and Industry (MCCI) Eng. Anas Sairafi said that the prayer area is under construction and the project is scheduled to be completed within six months.

Sairafi added: “The suspension bridge underwent long studies to determine if it can withstand the climatic and natural phenomena. As to the construction condition, it is safe for sure.

“The studies took several years to carry out followed by a careful revision and checking, to ensure that it can withstand the impacts of wind action, temperature changes, earthquakes and the difference in the settlement rates of the substrata and soil under the loads of the two towers, on the towers themselves, which are linked by the suspension bridge.

“Hence, it was decided that an iron structural framework would be the most suitable because it is lighter in weight and is more flexible at this height.”

A certain part of the area is movable to and from one of the two towers. As to the other part, it is almost fixed, except for being movable up to 20 cm.

The prayer area has an iron structure and does not contain concrete, he said.