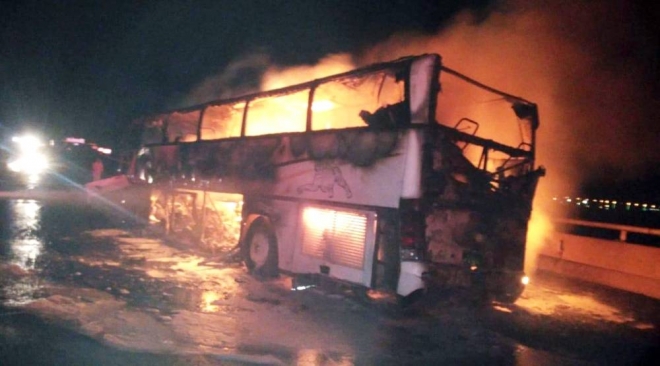 MADINAH/JEDDAH – Thirty-five expatriate Umrah pilgrims were burnt to death in a grisly traffic accident on Hijrah Road near Madinah on Wednesday evening. Four people who sustained serious injuries were taken to hospital.

The bus originally carried 50 passengers from Qassim to Madinah, with 11 of the pilgrims staying back in Madinah to spend time in Prophet's Mosque

Prince Faisal Bin Salman, emir of Madinah, has instructed to provide the necessary medical care and facilities for the injured. The emir offered his deep condolences to the bereaved family members of the deceased and wished a speedy recovery for the injured, who have been admitted to the nearby Al-Hamna Health Complex and Madinah hospital.

Daifallah Al-Shalahi, director of the complex, told Okaz/Saudi Gazette that 34 people died on the scene while another succumbed to his injuries after having been taken to hospital.

The horrific accident occurred on Markaz Al-Akhal, 170 km from Madinah, when the bus, which was carrying 39 pilgrims from Riyadh, collided with a wheel loader while it was on its way from Madinah to Makkah. All the victims are of Asian and Arab nationals.

“All the hospitals in Madinah region were put on emergency alert following the tragic incident. Among the five injured, one died at the complex while another three seriously injured were transferred later to Madinah hospital. The loader driver, an Arab national, is undergoing treatment at the complex, he said.

Madinah police spokesman said the concerned agencies have launched a probe into the accident. He said the security agencies and the Saudi Red Crescent Authority (SRCA) officials reached the scene of accident to deal with the situation immediately after receiving information about the tragedy.

Khaled Al-Sahli, spokesman of SRCA in Madinah, said that 20 emergency units of SRCA and ambulance units of the Health Department participated in the rescue operation.

The victims were expatriates who lived in the Kingdom and who were performing the umrah, the lesser pilgrimage to the Muslim holy places, which can be undertaken year round.

Pakistan said of the four people who survived the bus crash one was its nationals, while several other Pakistani citizens were killed.

"It has been reported that 35 passengers out of total 39 lost their lives," the Foreign Ministry in Islamabad said in a statement.

"Initial reports indicate that the deceased also include a certain number of Pakistani nationals. Of the four (4) survivors, there is one Pakistani named Mr. Akbar, who is seriously injured," it added.

The Pakistan Consulate General in Jeddah has established contact with him and is in touch with the concerned Saudi authorities and staff of the King Fahd Hospital, Madinah to ascertain details of casualties of Pakistani nationals.

The nationalities of the other victims was not immediately known but Indian Prime Minister Narendra Modi also sent his condolences.

"Anguished by the news of a bus crash in Saudi Arabia. Condolences to the families of those who lost their lives. Praying for a quick recovery of the injured," he tweeted. — With input from AFP


⇐ Previous:
Haj Ministry may cancel Mahram condition for women of all ages
Next: ⇒
Construction of suspended ‘prayer area’ in Makkah begins