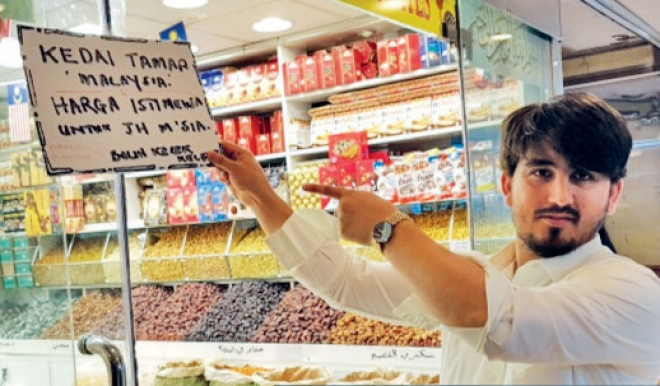 The Malays living here, however, find interacting in foreign languages quite a challenge. This is owing to the vast number of dialects spoken, particularly for Arabic

I REMEMBER brushing up on my English and learning some Arabic prior to my recent trip to Makkah and Madinah for work and worship.

I had assumed that English and Arabic would be the main languages of communication. However, soon after I entered the Khair Al Bilad Dates store at the Al-Haram Hotel in Madinah, I learned that this was a misperception.

The traders — a 25-year-old Pakistani-Arab named Mustaffa (picture) and his friend Ahmad Ansyar, 22 — greeted me in a Kelantanese Malay dialect.

Their ability to communicate with me in Malay, even if not fluently, made me curious about the diversity of languages used for communication in Makkah and Madinah.

Mustaffa told me the diversity was due to the sheer number of pilgrims from all corners of the world visiting the holy land every year to perform haj.

“When there is an influx of customers speaking in certain languages, traders like us will take the initiative to learn it out of necessity. However, I learned Malay and kecek Kelate (speaking in a Kelantanese dialect) through my course mates in university,” he told Bernama.

He said majority of the customers to his shop and the shops around the hotel were Malaysians as the hotel is the one of the main accommodations for Malaysian haj pilgrims travelling under Lembaga Tabung Haji (TH). It was, therefore, little wonder that the traders within the premises took the trouble to learn Malay language.

He added that his ability to kecek Kelate and speak in the Malay language also helped attract customers from Thailand and Indonesia.

Ahmad Ansyar said aside from Malaysian and Indonesian Malay, English and Arabic, petty traders around Madinah also learned to converse in Urdu and Hindi to attract potential customers, particularly from among Asian pilgrims.

“Young people like me find the conversations with all these people from across the world enlightening. I like to ask customers from Malaysia about the food in their country,” he said.

In Makkah, carpet trader Salahuddin shared the sentiment as well.

The 29-year-old said like Malaysia, Saudi Arabia had an interesting multiethnic society.

“You would not be the first person to assume that only Arabic-speaking Arabs live in Saudi Arabia. But actually, its history is filled with stories of people from different races, cultures and backgrounds speaking different languages — unlike Malaysia.

“Many come here from other countries, bringing with them a new culture, language and identity. They then become part of the people here and helped shape a new and unique country, just like Malaysia,” said Salahuddin, who is of Arab descent.

Perfume trader Muhammad Abdul Rahman’s ancestral background appears to back up Salahuddin’s claim. The 43-year-old owner of Abraj Janadriyah in Makkah told Bernama that his grandfather hailed all the way from Tanah Merah, Kelantan.

Muhammad, who was born in Makkah, said his grandfather had migrated to Makkah in the 50s to earn a living and become closer to God.

“Many Malays have migrated here over the years, including those from Indonesia and Thailand. Most of them are from Kelantan and Pattani. Although we live here, Malaysia is still in our hearts. We see ourselves as Malays as our families are still there. In fact, I even met my wife in Malaysia. She’s from Batu Pahat, Johor,” he said.

The Challenge in Speaking Arabic

The Malays living here, however, found interacting in foreign languages quite a challenge. This is owing to the vast number of dialects spoken, particularly for Arabic, said AECOM Arabia Ltd cost consultant Mohd Rus Abbas.

The 41-year-old from Sabak Bernam, Selangor, said he had worked in Makkah for eight years and found that Arabic used by the locals vastly differed from the Arabic taught at language classes in Malaysia. This made communication rather difficult for him.

“Before coming here (for work), we would of course prepare by taking Arabic language lessons in Malaysia. However, when we come here and speak the Arabic we learned back home, the locals would ask us which country’s dialect we’re speaking in,” he explained.

His Malaysian colleague Mohd Jamal Mohd Yusof, 41, who has lived in Saudi Arabia for six years, said the issue initially created a communication barrier, but this was overcome by communicating in English.

From my observation in Makkah and Madinah, Malaysians are very popular with the locals. That is perhaps why many traders took the initiative to learn the Malay language and speak it quite well.

Whenever they see the Jalur Gemilang on my lanyard, they would promptly greet me in Malay. It fills me with pride to see how well Malaysians are received there and how our national language is one of the languages spoken by the locals. — Bernama