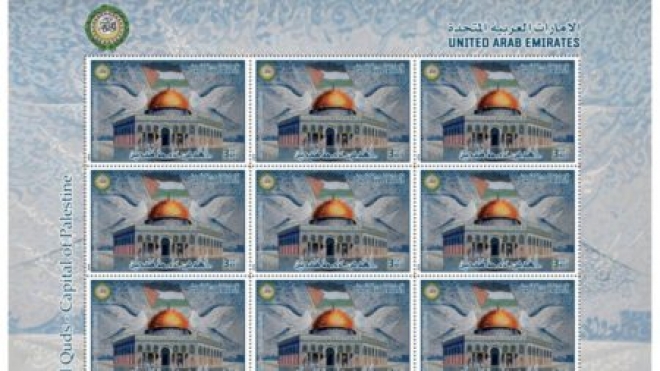 Emirates Post issued a commemorative stamp in support of Palestine featuring the Dome of the Rock, and stresses that Jerusalem al-Quds is the capital of Palestine.

The stamp features the Dome of the Rock, located at Al-Aqsa Mosque compound, the third holiest site in Islam, along with the flag of Palestine. A white dove symbolizing peace also appears.

According to Emirates Post, the “Al Quds – capital of Palestine” stamp aims to uphold the cultural importance the city holds in the eyes of Arabs.

“Such initiatives are proof that all Arab countries continue to stand by Palestine and support Al Quds’ cause, as well as a confirmation of the existing national ties and the special status Al Quds holds as an Arabic city and an important religious landmark,” said Obaid al-Qatami, acting chief commercial officer of Emirates Post Group.

He said, according to WAFA, that “it embodies the pivotal role of Emirates Post in issuing a diverse and enriched portfolio of stamps and in collaborating with other postal authorities in the region to highlight shared milestones and important causes”.

The move stems from a decision in 2018 when the Arab Permanent Postal Committee – the Arab League’s postal arm – agreed to issue a stamp in support of Palestine.