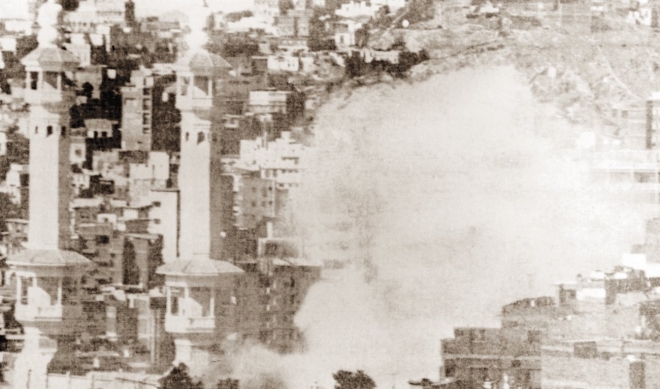 JEDDAH: Throughout October 1979, close to a million Muslims from around the world had flooded into Makkah for Hajj, the pilgrimage to the spiritual heart of Islam that every physically and financially able believer is obliged to complete at least once in their lifetime.

On the morning of Nov. 20, the call to the first prayer summoned pilgrims from far and wide to the courtyard of the Grand Mosque.

Some were locals, others were visitors who had finished their Hajj pilgrimage two weeks earlier and delayed their departure to take part in this once-in-a-lifetime event, before bidding farewell to a place that for centuries had seen countless millions like them come and go.

It was a little after 5:15 a.m. The first shots rang out across the courtyard moments after the imam, 55-year-old Sheikh Mohammed Al-Subayil, had finished the fajr, the first prayer of the day.

Worshippers stood side by side, forming a circular formation around the Kaaba, as they welcomed the dawn of the new Islamic century. But among their number was a group of fanatics the like of which the Holy Mosque had never seen before.

In the courtyard behind where Al-Subayil stood, the siege of the mosque claimed its first victims — two unarmed police guards gunned down at their posts.

As chaos ensued and the worshippers began to disperse, some managing to flee from the mosque in the confusion before the gates were closed by the attackers, three armed men pushed their way through the crowd toward the imam.

One, dressed in a short, ragged traditional dress, took the microphone and began issuing orders over the mosque’s loudspeakers.  “Get on the minarets! Position the snipers! Close the doors! Deploy the guards! Position the guards and sentinels in front of the doors!”

It was the ring-leader, Juhayman Al-Otaibi. Then he handed the microphone to another man, and what he had to say shocked the imam and all who heard it.

The Mahdi, in the shape of Mohammed bin Abdullah Al-Qahtani, had arrived to wipe the world of its evils and was here among the armed men who had seized the mosque and were now locking inside 100,000 pilgrims and residents. The speaker rejected the authority of the Saudi royal family and the ulema, the senior theologians of Islam, as illegitimate. Now everyone present, he said, must come forward to swear the oath of allegiance to the Mahdi.

The man himself, carrying an automatic weapon, stepped forward. He stood near the Kaaba, as the false prophecy adopted by the renegades had predicted the Mahdi would. Juhayman’s men took it in turns to swear their allegiance and then began forcing the worshippers to follow suit.

In the confusion, the imam blended into the crowd and made his way to his office in the mosque. There, he called Sheikh Nasser bin Hamad Al-Rashid, president of the General Presidency for the Affairs of the Two Holy Mosques, and told him what was going on — and held the phone up so he could hear the gunshots that were ringing out.

At first, the official response to the wholly unanticipated outrage was confused.

“When these individuals took over the mosque, the first people to deal with them were the mosque police, who at that time were simply unarmed, and there to direct people where to go rather than to enforce security,” said Prince Turki, the then head of the General Intelligence Directorate who at the time of the attack was in Tunis, attending an Arab League summit with Crown Prince Fahd bin Abdul Aziz (later King Fahd).

The National Guard and the Saudi Army began arriving at the Grand Mosque in force to try to retake the building. (Asharq Al-Awsat)

the senior cleric in charge of Makkah and Madinah, woke King Khaled to the news that the mosque had been seized.

By 9 a.m. they had joined Makkah’s regional governor, Prince Fawwaz bin Abdul Aziz, in the holy city. Prince Turki, meanwhile, was on the first plane back to Jeddah. In Makkah the National Guard and the Saudi Army had begun arriving at the mosque in force.

At about 8 a.m., a lone police officer approaching the mosque in a jeep was wounded by sniper fire. Minutes later, a fusillade of fire from snipers posted on rooftops and in minarets greeted more officers who arrived on another side of the mosque, killing eight and wounding 36 more.

The behavior of the militants appalled all who witnessed it. In one incident, one of Juhayman’s snipers in a minaret had been shot dead by the security forces outside the mosque and was callously pushed to the ground from the balcony by his compatriots.

It later emerged that weapons, ammunition and food had been smuggled into the mosque before the siege. Some guns had been hidden in large construction containers. But others, taking advantage of the tradition of Islamic funeral prayers conducted by the imam within the sacred mosque, had been concealed in coffins.

“Using coffins of the dead to smuggle arms into the Grand Mosque — who could have thought of exploiting this?” said Rashed Al-Shashai, an artist who as a young boy heard tales of the siege from his grandfather, who worked at the mosque and narrowly avoided being taken hostage.

Inside the mosque, fear and confusion reigned. Juhayman’s men had begun allowing some of the hostages to leave, but it was clear that they had no intention of freeing any Saudis. Many were forced to swear allegiance to the so-called Mahdi.

With others, Al-Shashai’s grandfather moved toward the north of the mosque. As the infamous Mahdi “sermon” blared out of the speakers and occasional shots rang out, they hid behind pillars and looked for a way out.

“They had one of two choices,” said Al-Shashai. “Either they believe in the salvation of Juhayman or believe in their own salvation, search for it themselves and get out of the dilemma they found themselves in.”

They chose the latter and continued moving from one pillar to the next, heading toward the northern end of the Safa-Marwa gallery. It was here that several people, including Al-Shashai’s grandfather, were able to escape.

By now the courtyard of the Grand Mosque, normally teeming with worshippers by this time on the first day of the new year, was eerily empty.

Juhayman’s men had forced men, women and children into the corridors of the mosque, and the silence was broken only by the crack of bullets as snipers fired on the surrounding security forces.